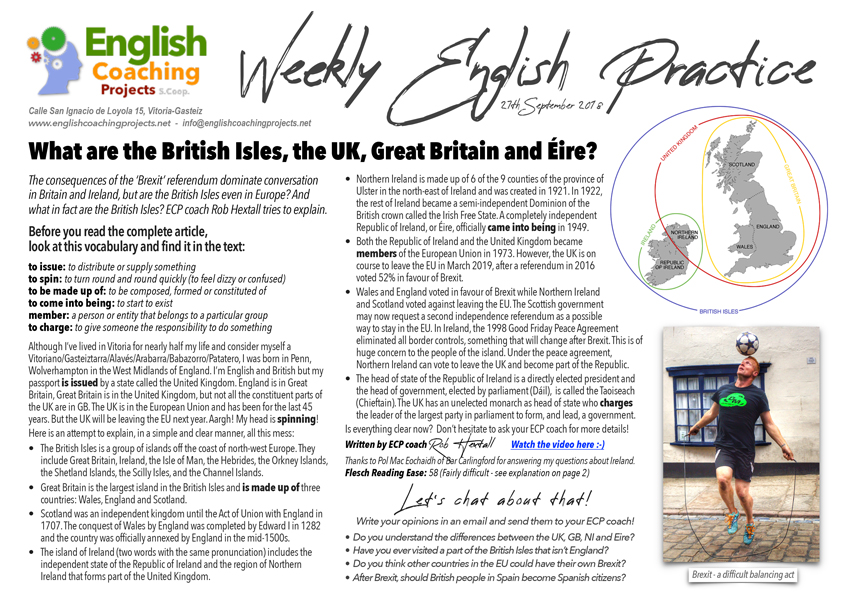 With Brexit coming next year, ECP coach Rob tries to explain what the British Isles are. It’s not easy!

to issue: to distribute or supply something

to spin: to turn round and round quickly (to feel dizzy or confused)

to be made up of: to be composed, formed or constituted of

to come into being: to start to exist

member: a person or entity that belongs to a particular group

to charge: to give someone the responsibility to do something

Although I’ve lived in Vitoria for nearly half my life and consider myself a Vitoriano/Gasteiztarra/Alavés/Arabarra/Babazorro/Patatero, I was born in Penn, Wolverhampton in the West Midlands of England. I’m English and British but my passport is issued by a state called the United Kingdom. England is in Great Britain, Great Britain is in the United Kingdom, but not all the constituent parts of the UK are in GB. The UK is in the European Union and has been for the last 45 years. But the UK will be leaving the EU next year. Aargh! My head is spinning!

Here is an attempt to explain, in a simple and clear manner, all this mess:

Is everything clear now?  Don’t hesitate to ask your ECP coach for more details!

Thanks to Pol Mac Eochaidh of Bar Carlingford for answering my questions about Ireland.