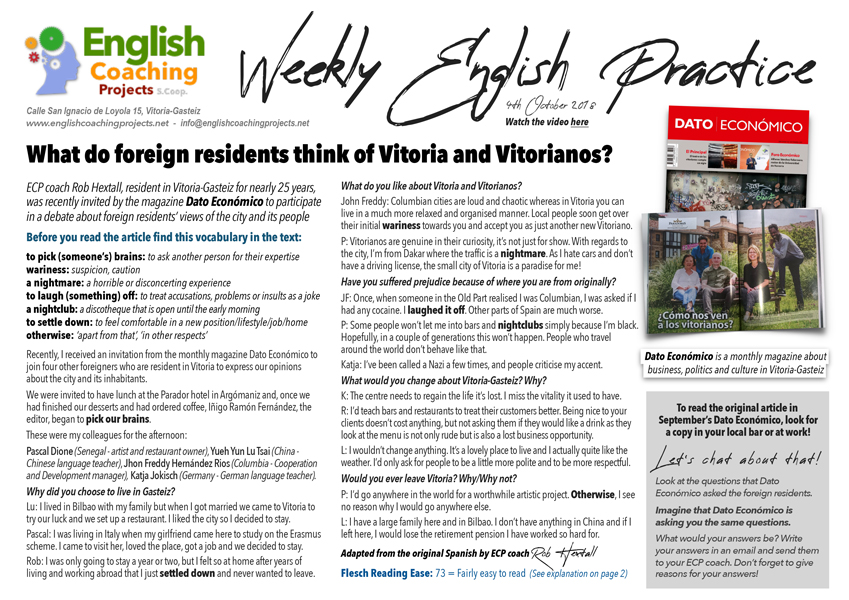 ECP coach Rob Hextall, resident in Vitoria-Gasteiz for nearly 25 years, was recently invited by the magazine Dato Económico to participate in a debate about foreign residents’ views of the city and its people

Before you read the article find this vocabulary in the text:

to pick (someone’s) brains: to ask another person for their expertise

a nightmare: a horrible or disconcerting experience

to laugh (something) off: to treat accusations, problems or insults as a joke

a nightclub: a discotheque that is open until the early morning

to settle down: to feel comfortable in a new position/lifestyle/job/home

otherwise: ‘apart from that’, ‘in other respects’

Recently, I received an invitation from the monthly magazine Dato Económico to join four other foreigners who are resident in Vitoria to express our opinions about the city and its inhabitants.

We were invited to have lunch at the Parador hotel in Argómaniz and, once we had finished our desserts and had ordered coffee, Iñigo Ramón Fernández, the editor, began to pick our brains.

These were my colleagues for the afternoon:

Why did you choose to live in Gasteiz?

Lu: I lived in Bilbao with my family but when I got married we came to Vitoria to try our luck and we set up a restaurant. I liked the city so I decided to stay.

Pascal: I was living in Italy when my girlfriend came here to study on the Erasmus scheme. I came to visit her, loved the place, got a job and we decided to stay.

Rob: I was only going to stay a year or two, but I felt so at home after years of living and working abroad that I just settled down and never wanted to leave.

John Freddy: Columbian cities are loud and chaotic whereas in Vitoria you can live in a much more relaxed and organised manner. Local people soon get over their initial wariness towards you and accept you as just another new Vitoriano.

P: Vitorianos are genuine in their curiosity, it’s not just for show. With regards to the city, I’m from Dakar where the traffic is a nightmare. As I hate cars and don’t have a driving license, the small city of Vitoria is a paradise for me!

Have you suffered prejudice because of where you are from originally?

JF: Once, when someone in the Old Part realised I was Columbian, I was asked if I had any cocaine. I laughed it off. Other parts of Spain are much worse.

P: Some people won’t let me into bars and nightclubs simply because I’m black. Hopefully, in a couple of generations this won’t happen. People who travel around the world don’t behave like that.

Katja: I’ve been called a Nazi a few times, and people criticise my accent.

What would you change about Vitoria-Gasteiz? Why?

K: The centre needs to regain the life it’s lost. I miss the vitality it used to have.

R: I’d teach bars and restaurants to treat their customers better. Being nice to your clients doesn’t cost anything, but not asking them if they would like a drink as they look at the menu is not only rude but is also a lost business opportunity.

L: I wouldn’t change anything. It’s a lovely place to live and I actually quite like the weather. I’d only ask for people to be a little more polite and to be more respectful.

Would you ever leave Vitoria? Why/Why not?

P: I’d go anywhere in the world for a worthwhile artistic project. Otherwise, I see no reason why I would go anywhere else.

L: I have a large family here and in Bilbao. I don’t have anything in China and if I left here, I would lose the retirement pension I have worked so hard for.

Now chat about the questions with your colleagues, friends and family. Send your ECP coach an email with your opinions!

Adapted from the original Spanish by ECP coach Rob Hextall