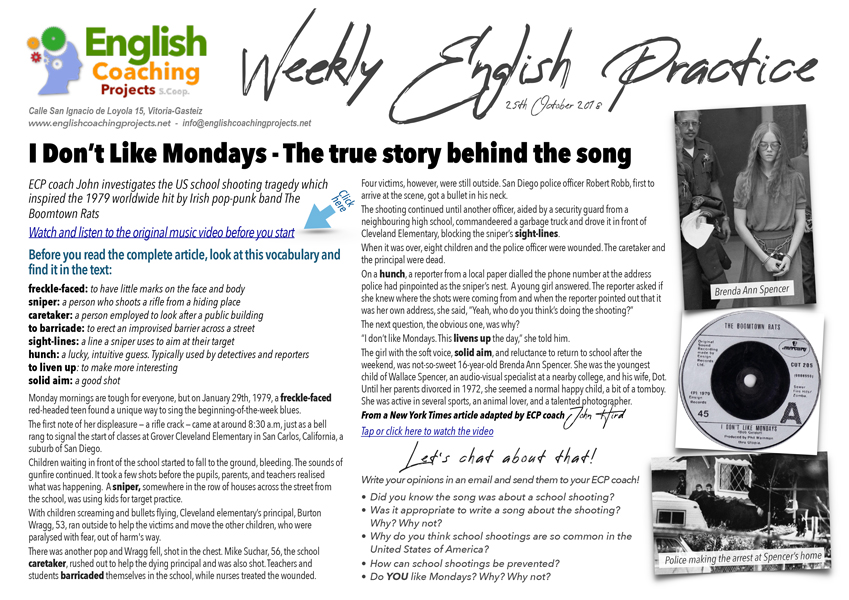 Watch and listen to the original music video before you start

freckle-faced: to have little marks on the face and body

sniper: a person who shoots a rifle from a hiding place

caretaker: a person employed to look after a public building

to barricade: to erect an improvised barrier across a street

sight-lines: a line a sniper uses to aim at their target

to liven up: to make more interesting

Monday mornings are tough for everyone, but on January 29th, 1979, a freckle-faced red-headed teen found a unique way to sing the beginning-of-the-week blues.

The first note of her displeasure — a rifle crack — came at around 8:30 a.m, just as a bell rang to signal the start of classes at Grover Cleveland Elementary in San Carlos, California, a suburb of San Diego.

Children waiting in front of the school started to fall to the ground, bleeding. The sounds of gunfire continued. It took a few shots before the pupils, parents, and teachers realised what was happening.  A sniper, somewhere in the row of houses across the street from the school, was using kids for target practice.

With children screaming and bullets flying, Cleveland elementary’s principal, Burton Wragg, 53, ran outside to help the victims and move the other children, who were paralysed with fear, out of harm’s way.

There was another pop and Wragg fell, shot in the chest. Mike Suchar, 56, the school caretaker, rushed out to help the dying principal and was also shot. Teachers and students barricaded themselves in the school, while nurses treated the wounded.

Four victims, however, were still outside. San Diego police officer Robert Robb, first to arrive at the scene, got a bullet in his neck.

The shooting continued until another officer, aided by a security guard from a neighbouring high school, commandeered a garbage truck and drove it in front of Cleveland Elementary, blocking the sniper’s sight-lines.

When it was over, eight children and the police officer were wounded. The caretaker and the principal were dead.

On a hunch, a reporter from a local paper dialled the phone number at the address police had pinpointed as the sniper’s nest.  A young girl answered. The reporter asked if she knew where the shots were coming from and when the reporter pointed out that it was her own address, she said, “Yeah, who do you think’s doing the shooting?”

The next question, the obvious one, was why?

“I don’t like Mondays. This livens up the day,” she told him.

The girl with the soft voice, solid aim, and reluctance to return to school after the weekend, was not-so-sweet 16-year-old Brenda Ann Spencer. She was the youngest child of Wallace Spencer, an audio-visual specialist at a nearby college, and his wife, Dot. Until her parents divorced in 1972, she seemed a normal happy child, a bit of a tomboy. She was active in several sports, an animal lover, and a talented photographer.