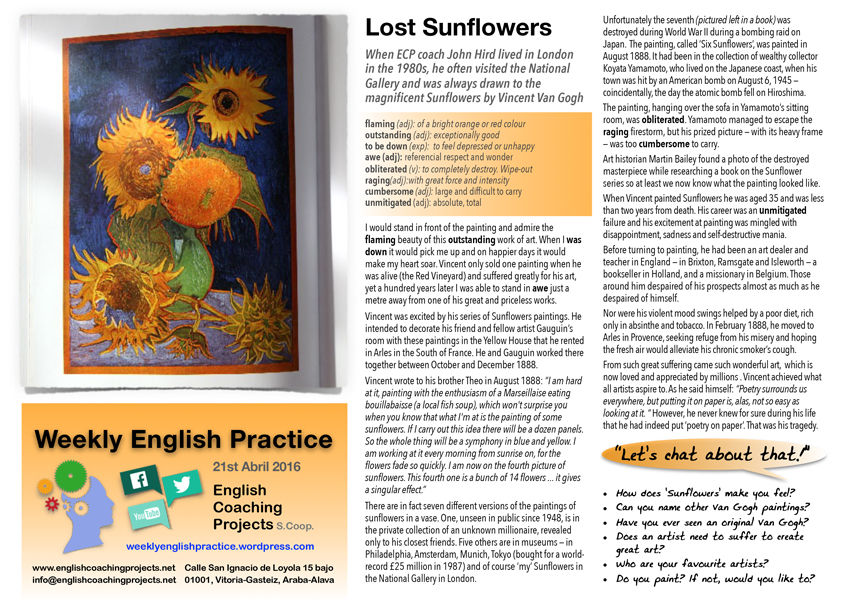 When ECP coach John Hird lived in London in the 1980s, he often visited the National Gallery and was always drawn to the magnificent Sunflowers by Vincent Van Gogh

flaming (adj): of a bright orange or red colour

to be down (exp):  to feel depressed or unhappy

I would stand in front of the painting and admire the flaming beauty of this outstanding work of art. When I was down it would pick me up and on happier days it would make my heart soar. Vincent only sold one painting when he was alive (the Red Vineyard) and suffered greatly for his art, yet a hundred years later I was able to stand in awe just a metre away from one of his great and priceless works.

Vincent was excited by his series of Sunflowers paintings. He intended to decorate his friend and fellow artist Gauguin’s room with these paintings in the Yellow House that he rented in Arles in the South of France. He and Gauguin worked there together between October and December 1888.

Vincent wrote to his brother Theo in August 1888: “I am hard at it, painting with the enthusiasm of a Marseillaise eating bouillabaisse (a local fish soup), which won’t surprise you when you know that what I’m at is the painting of some sunflowers. If I carry out this idea there will be a dozen panels. So the whole thing will be a symphony in blue and yellow. I am working at it every morning from sunrise on, for the flowers fade so quickly. I am now on the fourth picture of sunflowers. This fourth one is a bunch of 14 flowers … it gives a singular effect.”

There are in fact seven different versions of the paintings of sunflowers in a vase. One, unseen in public since 1948, is in the private collection of an unknown millionaire, revealed only to his closest friends. Five others are in museums — in Philadelphia, Amsterdam, Munich, Tokyo (bought for a world-record £25 million in 1987) and of course ‘my’ Sunflowers in the National Gallery in London.

Unfortunately the seventh (pictured left in a book) was destroyed during World War II during a bombing raid on Japan.  The painting, called ‘Six Sunflowers’, was painted in August 1888. It had been in the collection of wealthy collector Koyata Yamamoto, who lived on the Japanese coast, when his town was hit by an American bomb on August 6, 1945 — coincidentally, the day the atomic bomb fell on Hiroshima.

The painting, hanging over the sofa in Yamamoto’s sitting room, was obliterated. Yamamoto managed to escape the raging firestorm, but his prized picture — with its heavy frame — was too cumbersome to carry.

Art historian Martin Bailey found a photo of the destroyed masterpiece while researching a book on the Sunflower series so at least we now know what the painting looked like.

When Vincent painted Sunflowers he was aged 35 and was less than two years from death. His career was an unmitigated failure and his excitement at painting was mingled with disappointment, sadness and self-destructive mania.

Before turning to painting, he had been an art dealer and teacher in England — in Brixton, Ramsgate and Isleworth — a bookseller in Holland, and a missionary in Belgium. Those around him despaired of his prospects almost as much as he despaired of himself.

Nor were his violent mood swings helped by a poor diet, rich only in absinthe and tobacco. In February 1888, he moved to Arles in Provence, seeking refuge from his misery and hoping the fresh air would alleviate his chronic smoker’s cough.

From such great suffering came such wonderful art,  which is now loved and appreciated by millions . Vincent achieved what all artists aspire to. As he said himself: “Poetry surrounds us everywhere, but putting it on paper is, alas, not so easy as looking at it. “ However, he never knew for sure during his life that he had indeed put ‘poetry on paper’. That was his tragedy.