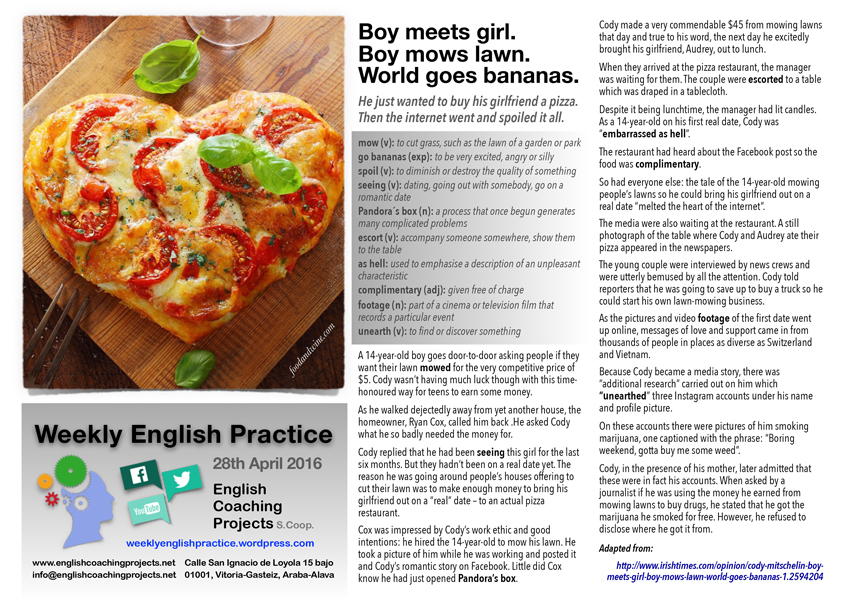 He just wanted to buy his girlfriend a pizza. Then the internet went and spoiled it all.

mow (v): to cut grass, such as the lawn of a garden or park

go bananas (exp): to be very excited, angry or silly

spoil (v): to diminish or destroy the quality of something

seeing (v): dating, going out with somebody, go on a romantic date

Pandora´s box (n): a process that once begun generates many complicated problems

escort (v): accompany someone somewhere, show them to the table

as hell: used to emphasise a description of an unpleasant characteristic

complimentary (adj): given free of charge

footage (n): part of a cinema or television film that records a particular event

unearth (v): to find or discover something

A 14-year-old boy goes door-to-door asking people if they want their lawn mowed for the very competitive price of $5. Cody wasn’t having much luck though with this time-honoured way for teens to earn some money.

As he walked dejectedly away from yet another house, the homeowner, Ryan Cox, called him back .He asked Cody what he so badly needed the money for.

Cody replied that he had been seeing this girl for the last six months. But they hadn’t been on a real date yet. The reason he was going around people’s houses offering to cut their lawn was to make enough money to bring his girlfriend out on a “real” date – to an actual pizza restaurant.

Cox was impressed by Cody’s work ethic and good intentions: he hired the 14-year-old to mow his lawn. He took a picture of him while he was working and posted it and Cody’s romantic story on Facebook. Little did Cox know he had just opened Pandora’s box.

Cody made a very commendable $45 from mowing lawns that day and true to his word, the next day he excitedly brought his girlfriend, Audrey, out to lunch.

When they arrived at the pizza restaurant, the manager was waiting for them. The couple were escorted to a table which was draped in a tablecloth.

Despite it being lunchtime, the manager had lit candles. As a 14-year-old on his first real date, Cody was “embarrassed as hell”.

So had everyone else: the tale of the 14-year-old mowing people’s lawns so he could bring his girlfriend out on a real date “melted the heart of the internet”.

The media were also waiting at the restaurant. A still photograph of the table where Cody and Audrey ate their pizza appeared in the newspapers.

The young couple were interviewed by news crews and were utterly bemused by all the attention. Cody told reporters that he was going to save up to buy a truck so he could start his own lawn-mowing business.

As the pictures and video footage of the first date went up online, messages of love and support came in from thousands of people in places as diverse as Switzerland and Vietnam.

Because Cody became a media story, there was “additional research” carried out on him which “unearthed” three Instagram accounts under his name and profile picture.

On these accounts there were pictures of him smoking marijuana, one captioned with the phrase: “Boring weekend, gotta buy me some weed”.

Cody, in the presence of his mother, later admitted that these were in fact his accounts. When asked by a journalist if he was using the money he earned from mowing lawns to buy drugs, he stated that he got the marijuana he smoked for free. However, he refused to disclose where he got it from.