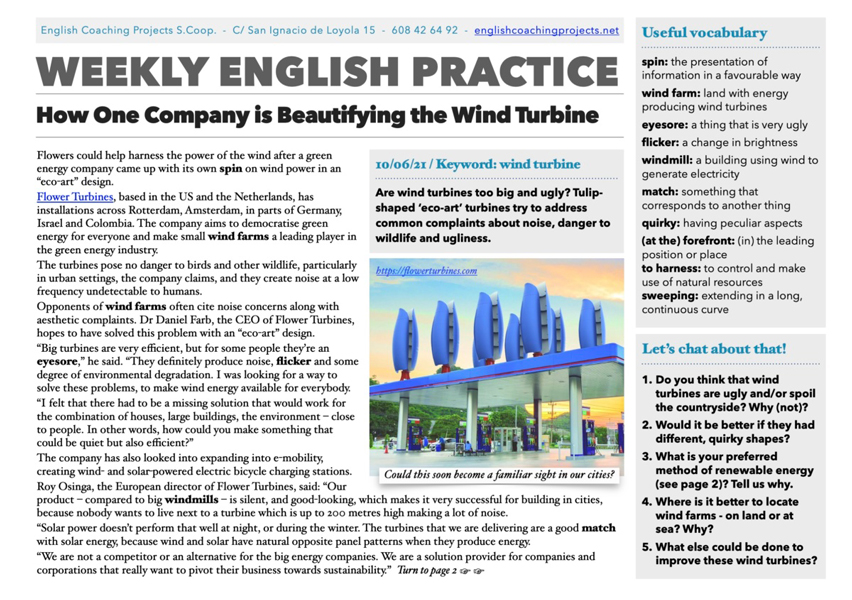 How One Company is Beautifying Wind Turbines

Are wind turbines too big and ugly? Tulip-shaped ‘eco-art’ turbines try to address common complaints about noise, danger to wildlife and ugliness.

spin: the presentation of information in a favourable way

eyesore: a thing that is very ugly

flicker: a change in brightness

match: something that corresponds to another thing

(at the) forefront: (in) the leading position or place

to harness: to control and make use of natural resources

Are wind turbines too big and ugly? Tulip-shaped ‘eco-art’ turbines try to address common complaints about noise, danger to wildlife and ugliness.

Flowers could help harness the power of the wind after a green energy company came up with its own spin on wind power in an “eco-art” design.

Flower Turbines, based in the US and the Netherlands, has installations across Rotterdam, Amsterdam, in parts of Germany, Israel and Colombia. The company aims to democratise green energy for everyone and make small wind farms a leading player in the green energy industry.

The turbines pose no danger to birds and other wildlife, particularly in urban settings, the company claims, and they create noise at a low frequency undetectable to humans.

Opponents of wind farms often cite noise concerns along with aesthetic complaints. Dr Daniel Farb, the CEO of Flower Turbines, hopes to have solved this problem with an “eco-art” design.

“Big turbines are very efficient, but for some people they’re an eyesore,” he said. “They definitely produce noise, flicker and some degree of environmental degradation. I was looking for a way to solve these problems, to make wind energy available for everybody.

“I felt that there had to be a missing solution that would work for the combination of houses, large buildings, the environment – close to people. In other words, how could you make something that could be quiet but also efficient?”

Roy Osinga, the European director of Flower Turbines, said: “Our product – compared to big windmills – is silent, and good-looking, which makes it very successful for building in cities, because nobody wants to live next to a turbine which is up to 200 metres high making a lot of noise.

“Solar power doesn’t perform that well at night, or during the winter. The turbines that we are delivering are a good match with solar energy, because wind and solar have natural opposite panel patterns when they produce energy.

“We are not a competitor or an alternative for the big energy companies. We are a solution provider for companies and corporations that really want to pivot their business towards sustainability.”

Quirky wind turbines have been at the forefront of wind power. Vortex Bladeless, a turbine that can harness energy from winds without the sweeping white blades synonymous with wind power, went viral on Reddit in March where the turbine was likened to a giant vibrating sex toy, or “skybrator”.

Another company, Alpha 311, which began in a garden shed in Whitstable, Kent, has begun manufacturing a small vertical wind turbine that it claims can generate electricity without wind.

Europe is working towards becoming climate-neutral by 2050, after member states and the UK parliament agreed on the necessary targets ahead of a virtual climate summit hosted by Joe Biden.

Monster Wind Turbines: What Are the Limits?