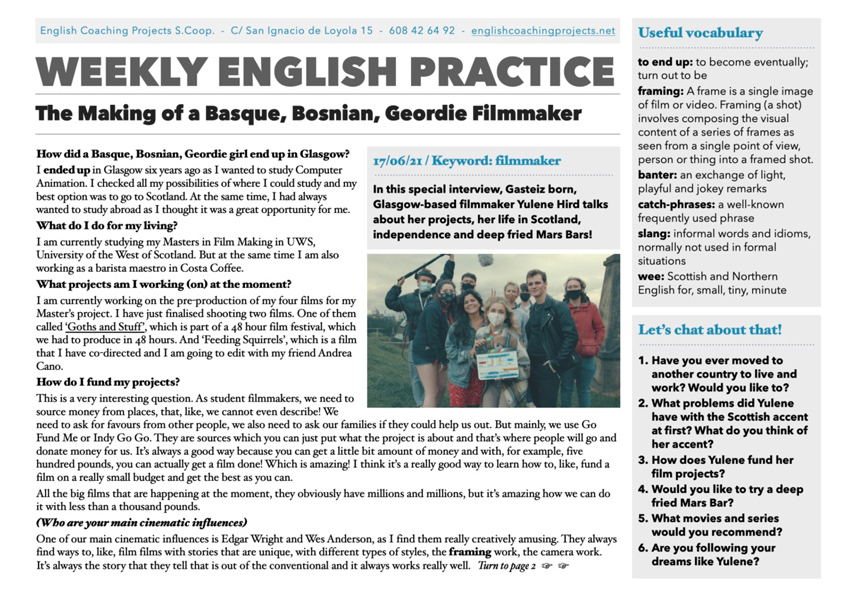 The Making of a Basque, Bosnian, Geordie Filmmaker

to end up: to become eventually; turn out to be

framing: A frame is a single image of film or video. Framing (a shot) involves composing the visual content of a series of frames as seen from a single point of view, person or thing into a framed shot.

banter: an exchange of light, playful and jokey remarks

How did a Basque, Bosnian, Geordie girl end up in Glasgow?

I ended up in Glasgow six years ago as I wanted to study Computer Animation. I checked all my possibilities of where I could study and my best option was to go to Scotland. At the same time, I had always wanted to study abroad as I thought it was a great opportunity for me.

What do I do for my living?

I am currently studying my Masters in Film Making in UWS, University of the West of Scotland. But at the same time I am also working as a barista maestro in Costa Coffee.

What projects am I working (on) at the moment?

I am currently working on the pre-production of my four films for my Master’s project. I have just finalised shooting two films. One of them called ‘Goths and Stuff’, which is part of a 48 hour film festival, which we had to produce in 48 hours. And ‘Feeding Squirrels’, which is a film that I have co-directed and I am going to edit with my friend Andrea Cano.

How do I fund my projects?

This is a very interesting question. As student filmmakers, we need to source money from places, that, like, we cannot even describe! We need to ask for favours from other people, we also need to ask our families if they could help us out. But mainly, we use Go Fund Me or Indy Go Go. They are sources which you can just put what the project is about and that’s where people will go and donate money for us. It’s always a good way because you can get a little bit amount of money and with, for example, five hundred pounds, you can actually get a film done! Which is amazing! I think it’s a really good way to learn how to, like, fund a film on a really small budget and get the best as you can.

All the big films that are happening at the moment, they obviously have millions and millions, but it’s amazing how we can do it with less than a thousand pounds.

(Who are your main cinematic influences)

One of our main cinematic influences is Edgar Wright and Wes Anderson, as I find them really creatively amusing. They always find ways to, like, film films with stories that are unique, with different types of styles, the framing work, the camera work. It’s always the story that they tell that is out of the conventional and it always works really well.

Can I recommend any new movies or Netflix series to the WEP listeners?

I would say, one of the main ones that helped me get into film making is actually a TV show called Hollywood. It’s on Netflix and it’s about Ryan Murphy. And it’s about the process of being a filmmaker and how a project goes from the pre-production into the production side and how, like, the hard work showcases how important it is to work on your dreams and in what you believe in, and the end the outcome is always the best.

Is the Scottish accent easy to understand?

What is my favourite Scottish phrase(s)?

My favourite one out of all of them is the saying ‘wee’ all the time. ‘Just a wee second’ or ‘That’s a wee one’. ‘That’s a wee tee-shirt.’ Like, it’s such a cute word to use and everyone understands it as well.

Unfortunately, they are! And they are absolutely disgusting. I would not recommend… If you wanna go on a night out and have one afterwards, get ready to feel sick for a few days. As a vegan myself, I don’t have any, but I have seen a few of my friends eat them and absolutely… do not recommend.

Scottish Independence. Yes or No?

Thank you so much for having me this week! And I hope that you like my episode. Film making has been my passion since I was very young, em…. I have just started realising that I have always liked this kind of industry and now that I am in it, em… it’s magical, and if you want to go and be a filmmaker, take a camera, take your iPhone, take a microphone and start recording, just anything that you want. Even if you are a writer, start writing scripts, because any story counts.

And I hope you have a very, very, very nice week!

From Gasteiz to Glasgow

Forget Brexit, what are the British Isles, the UK, Great Britain and Éire?

Become fluent in another language as an adult