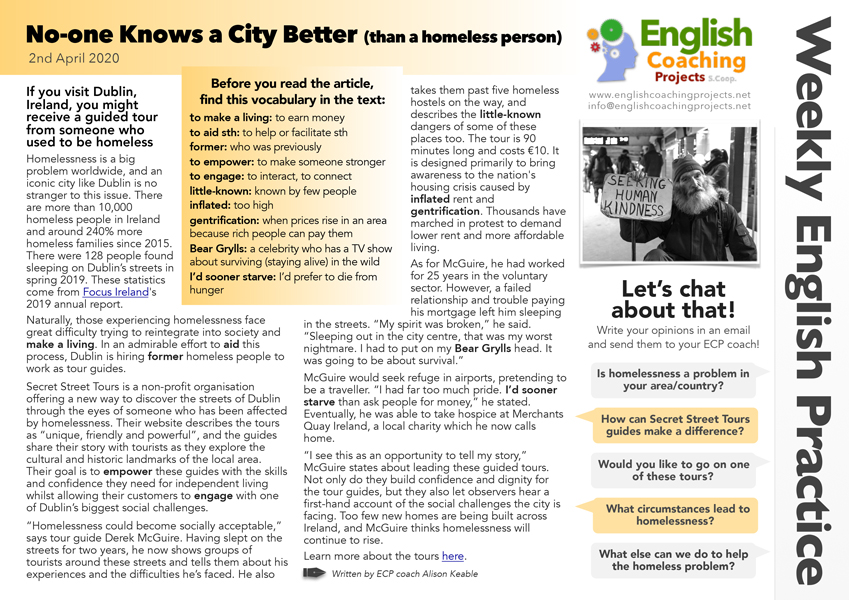 If you visit Dublin, Ireland, you might receive a guided tour from someone who used to be homeless

to make a living: to earn money

to aid sth: to help or facilitate sth

former: who was previously

to empower: to make someone stronger

to engage: to interact, to connect

gentrification: when prices rise in an area because rich people can pay them

Bear Grylls: a celebrity who has a TV show about surviving (staying alive) in the wild

If you visit Dublin, Ireland, you might receive a guided tour from someone who used to be homeless

Homelessness is a big problem worldwide, and an iconic city like Dublin is no stranger to this issue. There are more than 10,000 homeless people in Ireland and around 240% more homeless families since 2015. There were 128 people found sleeping on Dublin’s streets in spring 2019. These statistics come from Focus Ireland‘s 2019 annual report.

Naturally, those experiencing homelessness face great difficulty trying to reintegrate into society and make a living. In an admirable effort to aid this process, Dublin is hiring former homeless people to work as tour guides.

Secret Street Tours is a non-profit organisation offering a new way to discover the streets of Dublin through the eyes of someone who has been affected by homelessness. Their website describes the tours as “unique, friendly and powerful”, and the guides share their story with tourists as they explore the cultural and historic landmarks of the local area. Their goal is to empower these guides with the skills and confidence they need for independent living whilst allowing their customers to engage with one of Dublin’s biggest social challenges.

“Homelessness could become socially acceptable,” says tour guide Derek McGuire. Having slept on the streets for two years, he now shows groups of tourists around these streets and tells them about his experiences and the difficulties he’s faced. He also takes them past five homeless hostels on the way, and describes the little-known dangers of some of these places too. The tour is 90 minutes long and costs €10. It is designed primarily to bring awareness to the nation’s housing crisis caused by inflated rent and gentrification. Thousands have marched in protest to demand lower rent and more affordable living.

As for McGuire, he had worked for 25 years in the voluntary sector. However, a failed relationship and trouble paying his mortgage left him sleeping in the streets. “My spirit was broken,” he said. “Sleeping out in the city centre, that was my worst nightmare. I had to put on my Bear Grylls head. It was going to be about survival.”

McGuire would seek refuge in airports, pretending to be a traveller. “I had far too much pride. I’d sooner starve than ask people for money,” he stated. Eventually, he was able to take hospice at Merchants Quay Ireland, a local charity which he now calls home.

“I see this as an opportunity to tell my story,” McGuire states about leading these guided tours. Not only do they build confidence and dignity for the tour guides, but they also let observers hear a first-hand account of the social challenges the city is facing. Too few new homes are being built across Ireland, and McGuire thinks homelessness will continue to rise.

Learn more about the tours here.