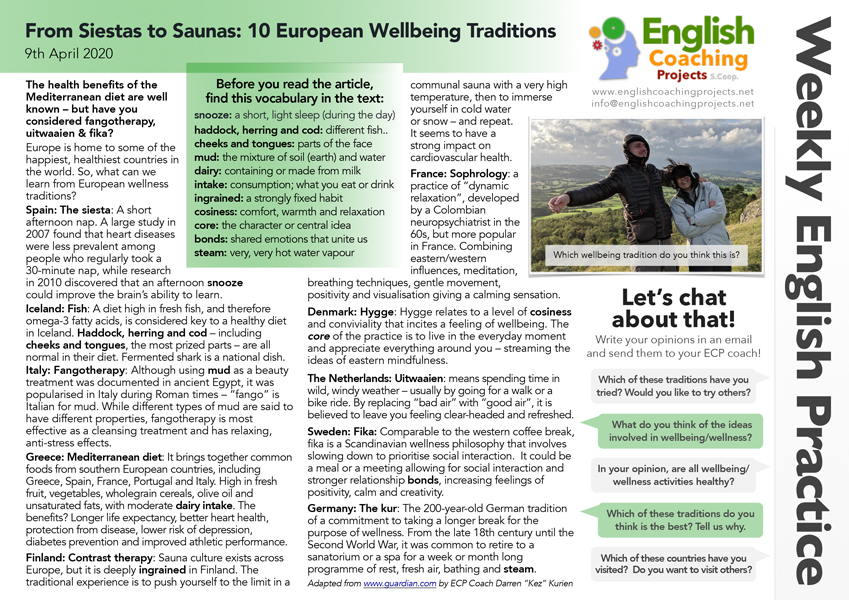 Europe is home to some of the happiest, healthiest countries in the world. So, what can we learn from European wellness traditions?

snooze: a short, light sleep (during the day)

cheeks and tongues: parts of the face

mud: the mixture of soil (earth) and water

dairy: containing or made from milk

intake: consumption; what you eat or drink

core: the character or central idea

bonds: shared emotions that unite us

The health benefits of the Mediterranean diet are well known – but have you considered fangotherapy, uitwaaien & fika?

Europe is home to some of the happiest, healthiest countries in the world. So, what can we learn from European wellness traditions?

Spain: The siesta: A short afternoon nap. A large study in 2007 found that heart diseases were less prevalent among people who regularly took a 30-minute nap, while research in 2010 discovered that an afternoon snooze could improve the brain’s ability to learn.

Iceland: Fish: A diet high in fresh fish, and therefore omega-3 fatty acids, is considered key to a healthy diet in Iceland. Haddock, herring and cod – including cheeks and tongues, the most prized parts – are all normal in their diet. Fermented shark is a national dish.

Italy: Fangotherapy: Although using mud as a beauty treatment was documented in ancient Egypt, it was popularised in Italy during Roman times – “fango” is Italian for mud. While different types of mud are said to have different properties, fangotherapy is most effective as a cleansing treatment and has relaxing, anti-stress effects.

Finland: Contrast therapy: Sauna culture exists across Europe, but it is deeply ingrained in Finland. The traditional experience is to push yourself to the limit in a communal sauna with a very high temperature, then to immerse yourself in cold water or snow – and repeat. It seems to have a strong impact on cardiovascular health.

Denmark: Hygge: Hygge relates to a level of cosiness and conviviality that incites a feeling of wellbeing. The core of the practice is to live in the everyday moment and appreciate everything around you – streaming the ideas of eastern mindfulness.

The Netherlands: Uitwaaien: means spending time in wild, windy weather – usually by going for a walk or a bike ride. By replacing “bad air” with “good air”, it is believed to leave you feeling clear-headed and refreshed.

Sweden: Fika: Comparable to the western coffee break, fika is a Scandinavian wellness philosophy that involves slowing down to prioritise social interaction.  It could be a meal or a meeting allowing for social interaction and stronger relationship bonds, increasing feelings of positivity, calm and creativity.

Germany: The kur: The 200-year-old German tradition of a commitment to taking a longer break for the purpose of wellness. From the late 18th century until the Second World War, it was common to retire to a sanatorium or a spa for a week or month long programme of rest, fresh air, bathing and steam.