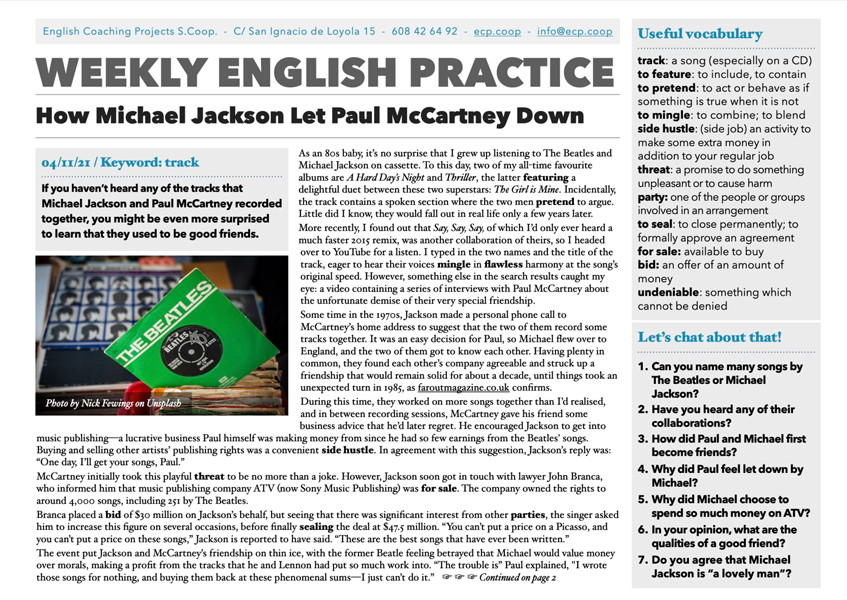 If you haven’t heard any of the tracks that Michael Jackson and Paul McCartney recorded together, you might be even more surprised to learn that they used to be good friends.

track: a song (especially on a CD)

to feature: to include, to contain

to pretend: to act or behave as if something is true when it is not
to mingle: to combine; to blend

side hustle: (side job) an activity to make some extra money in addition to your regular job

threat: a promise to do something unpleasant or to cause harm
party: one of the people or groups involved in an arrangement

to seal: to close permanently; to formally approve an agreement

for sale: available to buy

bid: an offer of an amount of money

undeniable: something which cannot be denied

If you haven’t heard any of the tracks that Michael Jackson and Paul McCartney recorded together, you might be even more surprised to learn that they used to be good friends.

As an 80s baby, it’s no surprise that I grew up listening to The Beatles and Michael Jackson on cassette. To this day, two of my all-time favourite albums are A Hard Day’s Night and Thriller, the latter featuring a delightful duet between these two superstars: The Girl is Mine. Incidentally, the track contains a spoken section where the two men pretend to argue. Little did I know, they would fall out in real life only a few years later.

More recently, I found out that Say, Say, Say, of which I’d only ever heard a much faster 2015 remix, was another collaboration of theirs, so I headed over to YouTube for a listen. I typed in the two names and the title of the track, eager to hear their voices mingle in flawless harmony at the song’s original speed. However, something else in the search results caught my eye: a video containing a series of interviews with Paul McCartney about the unfortunate demise of their very special friendship.

Some time in the 1970s, Jackson made a personal phone call to McCartney’s home address to suggest that the two of them record some tracks together. It was an easy decision for Paul, so Michael flew over to England, and the two of them got to know each other. Having plenty in common, they found each other’s company agreeable and struck up a friendship that would remain solid for about a decade, until things took an unexpected turn in 1985, as faroutmagazine.co.uk confirms.

During this time, they worked on more songs together than I’d realised, and in between recording sessions, McCartney gave his friend some business advice that he’d later regret. He encouraged Jackson to get into music publishing—a lucrative business Paul himself was making money from since he had so few earnings from the Beatles’ songs. Buying and selling other artists’ publishing rights was a convenient side hustle. In agreement with this suggestion, Jackson’s reply was: “One day, I’ll get your songs, Paul.”

McCartney initially took this playful threat to be no more than a joke. However, Jackson soon got in touch with lawyer John Branca, who informed him that music publishing company ATV (now Sony Music Publishing) was for sale. The company owned the rights to around 4,000 songs, including 251 by The Beatles.

Branca placed a bid of $30 million on Jackson’s behalf, but seeing that there was significant interest from other parties, the singer asked him to increase this figure on several occasions, before finally sealing the deal at $47.5 million. “You can’t put a price on a Picasso, and you can’t put a price on these songs,” Jackson is reported to have said. “These are the best songs that have ever been written.”

The event put Jackson and McCartney’s friendship on thin ice, with the former Beatle feeling betrayed that Michael would value money over morals, making a profit from the tracks that he and Lennon had put so much work into. “The trouble is” Paul explained, “I wrote those songs for nothing, and buying them back at these phenomenal sums—I just can’t do it.”

What’s more, whenever McCartney confronted Michael about the move, his answer was “That’s just business, Paul.”

Despite his disappointment with the way things went, McCartney remains an admirer of Jackson’s undeniable talent, and describes him as “a lovely man”.

I Don’t Like Mondays; The true story behind the song