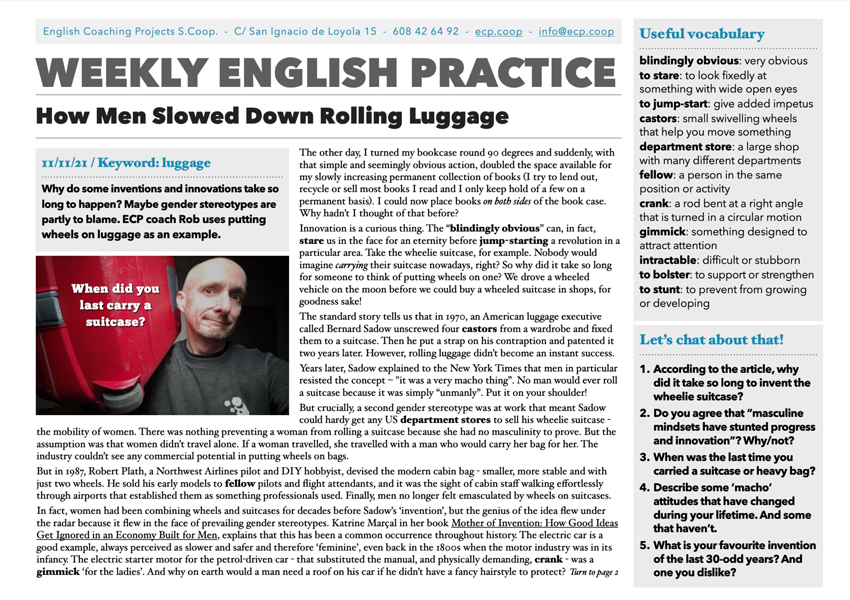 How Men Slowed Down Rolling Luggage

Why do some inventions and innovations take so long to happen? Maybe gender stereotypes are partly to blame. ECP coach Rob uses putting wheels on luggage as an example.

to stare: to look fixedly at something with wide open eyes

to jump-start: give added impetus

castors: small swivelling wheels that help you move something

department store: a large shop with many different departments

fellow: a person in the same position or activity

crank: a rod bent at a right angle that is turned in a circular motion

gimmick: something designed to attract attention

to bolster: to support or strengthen

to stunt: to prevent from growing or developing

Why do some inventions and innovations take so long to happen? Maybe gender stereotypes are partly to blame. ECP coach Rob uses putting wheels on luggage as an example.

The other day, I turned my bookcase round 90 degrees and suddenly, with that simple and seemingly obvious action, doubled the space available for my slowly increasing permanent collection of books (I try to lend out, recycle or sell most books I read and I only keep hold of a few on a permanent basis). I could now place books on both sides of the book case. Why hadn’t I thought of that before?

Innovation is a curious thing. The “blindingly obvious” can, in fact, stare us in the face for an eternity before jump-starting a revolution in a particular area. Take the wheelie suitcase, for example. Nobody would imagine carrying their suitcase nowadays, right? So why did it take so long for someone to think of putting wheels on one? We drove a wheeled vehicle on the moon before we could buy a wheeled suitcase in shops, for goodness sake!

The standard story tells us that in 1970, an American luggage executive called Bernard Sadow unscrewed four castors from a wardrobe and fixed them to a suitcase. Then he put a strap on his contraption and patented it two years later. However, rolling luggage didn’t become an instant success.

Years later, Sadow explained to the New York Times that men in particular resisted the concept – “it was a very macho thing”. No man would ever roll a suitcase because it was simply “unmanly”. Put it on your shoulder!

But crucially, a second gender stereotype was at work that meant Sadow could hardy get any US department stores to sell his wheelie suitcase – the mobility of women. There was nothing preventing a woman from rolling a suitcase because she had no masculinity to prove. But the assumption was that women didn’t travel alone. If a woman travelled, she travelled with a man who would carry her bag for her. The industry couldn’t see any commercial potential in putting wheels on bags.

But in 1987, Robert Plath, a Northwest Airlines pilot and DIY hobbyist, devised the modern cabin bag – smaller, more stable and with just two wheels. He sold his early models to fellow pilots and flight attendants, and it was the sight of cabin staff walking effortlessly through airports that established them as something professionals used. Finally, men no longer felt emasculated by wheels on suitcases.

In fact, women had been combining wheels and suitcases for decades before Sadow’s ‘invention’, but the genius of the idea flew under the radar because it flew in the face of prevailing gender stereotypes. Katrine Marçal in her book Mother of Invention: How Good Ideas Get Ignored in an Economy Built for Men, explains that this has been a common occurrence throughout history. The electric car is a good example, always perceived as slower and safer and therefore ‘feminine’, even back in the 1800s when the motor industry was in its infancy. The electric starter motor for the petrol-driven car – that substituted the manual, and physically demanding, crank – was a gimmick ‘for the ladies’. And why on earth would a man need a roof on his car if he didn’t have a fancy hairstyle to protect?  Turn to page 2

Marçal goes further: “Doctrines like ‘real men don’t eat vegetables’, ‘real men don’t get check-ups for minor things’ and ‘real men don’t have sex with condoms’ kill very real men every day,” she writes in The Guardian. “Our society’s ideas on masculinity are some of our most intractable, and our culture often values the preservation of certain concepts of masculinity over life itself,” she declares.

As the reality of climate change finally gets our full attention and we cry out for inventive solutions, maybe, as a society, we can learn to set aside those masculine mindsets that bolster attitudes towards problematic issues such as eating meat and driving large cars. They have undoubtedly stunted progress and innovation, something that could ultimately prove to be disastrous for us all.

Communication Revolutions: From the Telegraph to the Internet of Things