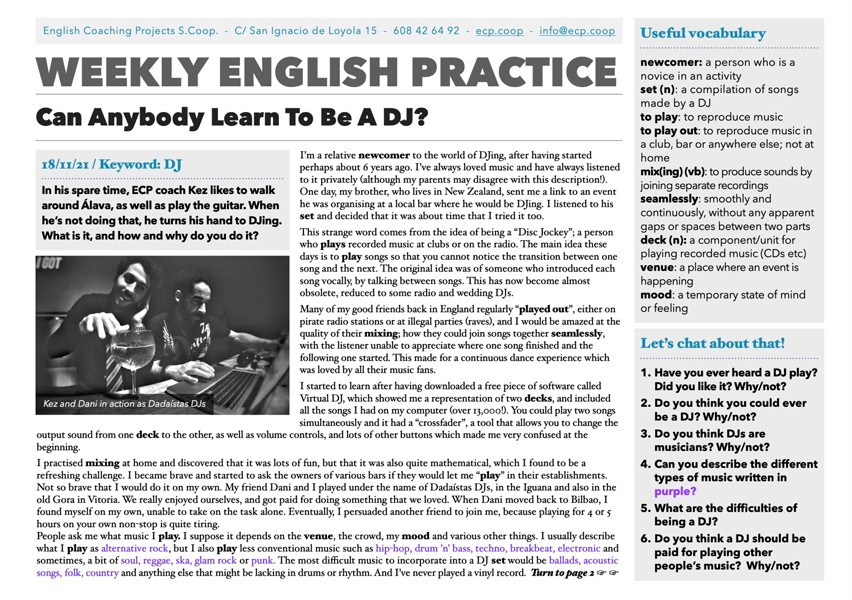 Can Anybody Learn To Be A DJ?

In his spare time, ECP coach Kez likes to walk around Álava, as well as play the guitar. When he’s not doing that, he turns his hand to DJing. What is it, and how and why do you do it?

newcomer: a person who is a novice in an activity

set (n): a compilation of songs made by a DJ

to play: to reproduce music

to play out: to reproduce music in a club, bar or anywhere else; not at home

seamlessly: smoothly and continuously, without any apparent gaps or spaces between two parts

venue: a place where an event is happening

mood: a temporary state of mind or feeling

In his spare time, ECP coach Kez likes to walk around Álava, as well as play the guitar. When he’s not doing that, he turns his hand to DJing. What is it, and how and why do you do it?

I’m a relative newcomer to the world of DJing, after having started perhaps about 6 years ago. I’ve always loved music and have always listened to it privately (although my parents may disagree with this description!). One day, my brother, who lives in New Zealand, sent me a link to an event he was organising at a local bar where he would be DJing. I listened to his set and decided that it was about time that I tried it too.

This strange word comes from the idea of being a “Disc Jockey”; a person who plays recorded music at clubs or on the radio. The main idea these days is to play songs so that you cannot notice the transition between one song and the next. The original idea was of someone who introduced each song vocally, by talking between songs. This has now become almost obsolete, reduced to some radio and wedding DJs.

Many of my good friends back in England regularly “played out”, either on pirate radio stations or at illegal parties (raves), and I would be amazed at the quality of their mixing; how they could join songs together seamlessly, with the listener unable to appreciate where one song finished and the following one started. This made for a continuous dance experience which was loved by all their music fans.

I started to learn after having downloaded a free piece of software called Virtual DJ, which showed me a representation of two decks, and included all the songs I had on my computer (over 13,000!). You could play two songs simultaneously and it had a “crossfader”, a tool that allows you to change the output sound from one deck to the other, as well as volume controls, and lots of other buttons which made me very confused at the beginning.

I practised mixing at home and discovered that it was lots of fun, but that it was also quite mathematical, which I found to be a refreshing challenge. I became brave and started to ask the owners of various bars if they would let me “play” in their establishments. Not so brave that I would do it on my own. My friend Dani and I played under the name of Dadaístas DJs, in the Iguana and also in the old Gora in Vitoria. We really enjoyed ourselves, and got paid for doing something that we loved. When Dani moved back to Bilbao, I found myself on my own, unable to take on the task alone. Eventually, I persuaded another friend to join me, because playing for 4 or 5 hours on your own non-stop is quite tiring.

People ask me what music I play. I suppose it depends on the venue, the crowd, my mood and various other things. I usually describe what I play as alternative rock, but I also play less conventional music such as hip-hop, drum ’n’ bass, techno, breakbeat, electronic and sometimes, a bit of soul, reggae, ska, glam rock or punk. The most difficult music to incorporate into a DJ set would be ballads, acoustic songs, folk, country and anything else that might be lacking in drums or rhythm. And I’ve never played a vinyl record.

Other people ask me if it’s complicated to mix songs into each other without being able to hear that there are two songs playing at the same time. My answer is: It’s always easier to notice a bad DJ than a good one.

So, can anybody become a DJ? Well, perhaps not everybody can. You need to have a good ear for music, a good sense of timing, be able to guess what the crowd want to hear, change things quickly when people start to leave and be able to ignore requests for Britney Spears when you are playing The Rolling Stones! But anyone can try and learn. It’s rewarding, but it also takes lots of effort (and sometimes money and time as well).

Let’s chat about being a DJ!

How a bad taste in music really CAN ruin a relationship