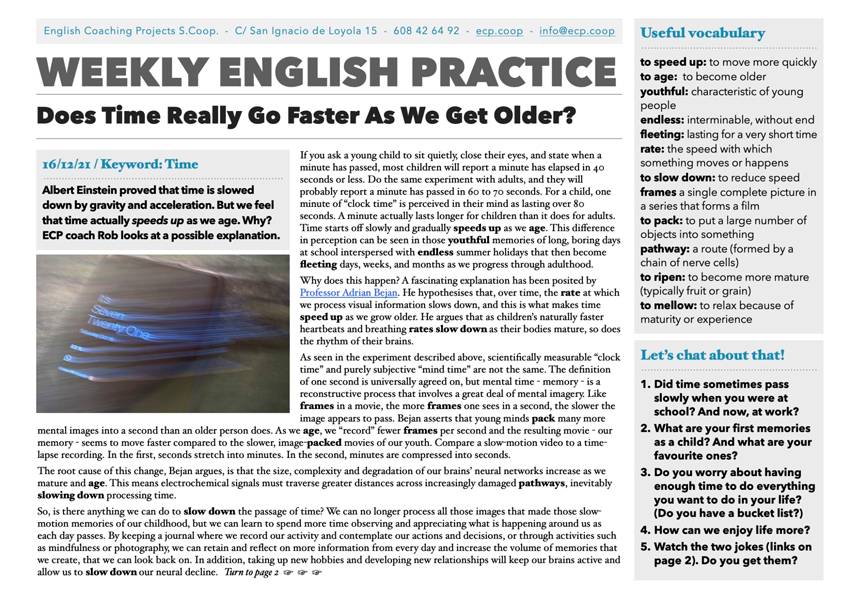 Does Time Really Go Faster As We Get Older?

Albert Einstein proved that time is slowed down by gravity and acceleration. But we feel that time actually speeds up as we age. Why? ECP coach Rob looks at a possible explanation.

to speed up: to move more quickly

to age:  to become older

rate: the speed with which something moves or happens

to slow down: to reduce speed

to pack: to put a large number of objects into something

pathway: a route (formed by a chain of nerve cells)

to ripen: to become more mature (typically fruit or grain)

to mellow: to relax because of maturity or experience

Albert Einstein proved that time is slowed down by gravity and acceleration. But we feel that time actually speeds up as we age. Why? ECP coach Rob looks at a possible explanation.

If you ask a young child to sit quietly, close their eyes, and state when a minute has passed, most children will report a minute has elapsed in 40 seconds or less. Do the same experiment with adults, and they will probably report a minute has passed in 60 to 70 seconds. For a child, one minute of “clock time” is perceived in their mind as lasting over 80 seconds. A minute actually lasts longer for children than it does for adults. Time starts off slowly and gradually speeds up as we age. This difference in perception can be seen in those youthful memories of long, boring days at school interspersed with endless summer holidays that then become fleeting days, weeks, and months as we progress through adulthood.

Why does this happen? A fascinating explanation has been posited by Professor Adrian Bejan. He hypothesises that, over time, the rate at which we process visual information slows down, and this is what makes time speed up as we grow older. He argues that as children’s naturally faster heartbeats and breathing rates slow down as their bodies mature, so does the rhythm of their brains.

As seen in the experiment described above, scientifically measurable “clock time” and purely subjective “mind time” are not the same. The definition of one second is universally agreed on, but mental time – memory – is a reconstructive process that involves a great deal of mental imagery. Like frames in a movie, the more frames one sees in a second, the slower the image appears to pass. Bejan asserts that young minds pack many more mental images into a second than an older person does. As we age, we “record” fewer frames per second and the resulting movie – our memory – seems to move faster compared to the slower, image-packed movies of our youth. Compare a slow-motion video to a time-lapse recording. In the first, seconds stretch into minutes. In the second, minutes are compressed into seconds.

The root cause of this change, Bejan argues, is that the size, complexity and degradation of our brains’ neural networks increase as we mature and age. This means electrochemical signals must traverse greater distances across increasingly damaged pathways, inevitably slowing down processing time.

So, is there anything we can do to slow down the passage of time? We can no longer process all those images that made those slow-motion memories of our childhood, but we can learn to spend more time observing and appreciating what is happening around us as each day passes. By keeping a journal where we record our activity and contemplate our actions and decisions, or through activities such as mindfulness or photography, we can retain and reflect on more information from every day and increase the volume of memories that we create, that we can look back on. In addition, taking up new hobbies and developing new relationships will keep our brains active and allow us to slow down our neural decline.

“Live life to the full” is an age-old saying that, if put into practice as we ripen and mellow, may in fact turn ageing into an action-packed movie with a few additional slow-motion scenes that will continue to make us smile as we enjoy a second childhood.

As Einstein so famously proved, time is relative, depending on the observer. So, let’s observe more (and better) and make our precious time here on Earth last longer, even if that perception is only inside our own heads.

Adapted from this article at psychologytoday.com by ECP coach Rob.

Let’s chat about how time passes!

Let’s Use Time Travel to Improve Your English!

Edurne Pasaban: Two Lifetimes in One

Punctuality is the thief of time