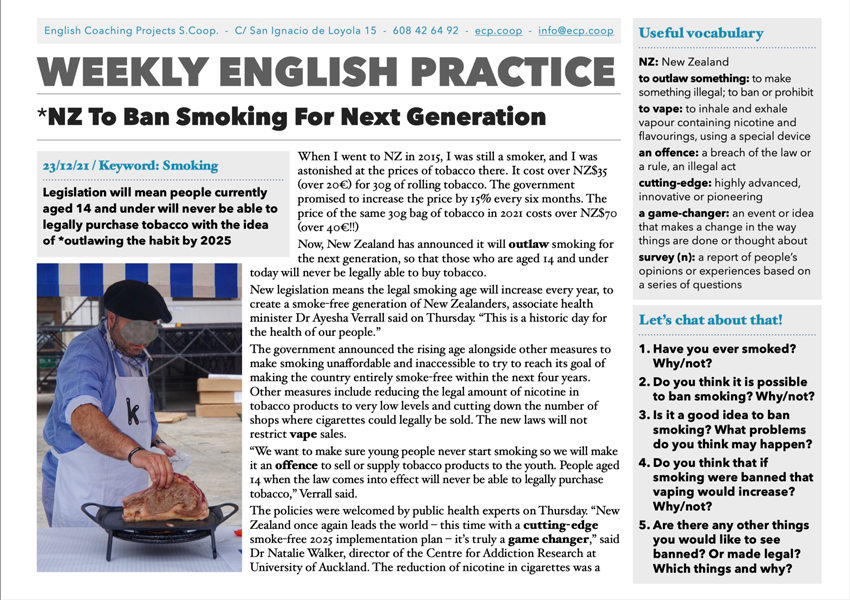 New Zealand To Ban Smoking For Next Generation

Legislation will mean people currently aged 14 and under will never be able to legally purchase tobacco with the idea of outlawing the habit by 2025.

to outlaw something: to make something illegal; to ban or prohibit

to vape: to inhale and exhale vapour containing nicotine and flavourings, using a special device

an offence: a breach of the law or a rule, an illegal act

a game-changer: an event or idea that makes a change in the way things are done or thought about

survey (n): a report of people’s opinions or experiences based on a series of questions

Legislation will mean people currently aged 14 and under will never be able to legally purchase tobacco with the idea of outlawing the habit by 2025.

Now, New Zealand has announced it will outlaw smoking for the next generation, so that those who are aged 14 and under today will never be legally able to buy tobacco.

New legislation means the legal smoking age will increase every year, to create a smoke-free generation of New Zealanders, associate health minister Dr Ayesha Verrall said on Thursday. “This is a historic day for the health of our people.”

The government announced the rising age alongside other measures to make smoking unaffordable and inaccessible to try to reach its goal of making the country entirely smoke-free within the next four years. Other measures include reducing the legal amount of nicotine in tobacco products to very low levels and cutting down the number of shops where cigarettes could legally be sold. The new laws will not restrict vape sales.

“We want to make sure young people never start smoking so we will make it an offence to sell or supply tobacco products to the youth. People aged 14 when the law comes into effect will never be able to legally purchase tobacco,” Verrall said.

The policies were welcomed by public health experts on Thursday. “New Zealand once again leads the world – this time with a cutting-edge smoke-free 2025 implementation plan – it’s truly a game changer,” said Dr Natalie Walker, director of the Centre for Addiction Research at University of Auckland. The reduction of nicotine in cigarettes was a world first, said Chris Bullen, a public health professor. From a health perspective, “all my wishes have come true”, he said.

New Zealand’s daily smoking rates have been dropping over time – down to 11.6% in 2018, from 18% a decade earlier. Smoking has already been widely replaced by vaping among teenage New Zealanders, and is also attracting many young people who would never have taken up smoking – according to a survey of 19,000 high school students this year, nearly 20% were vaping daily or several times a day, the majority with high nicotine doses. That’s compared to 3% of those aged 15-17 who smoked daily in 2018, or 13% who smoked a decade earlier.
Verrall said the new legislation would be introduced in 2022, with the age limits coming in in 2023.

Adapted from this article from theguardian.com by ECP coach Darren “Kez” Kurien

How to Break Bad Habits