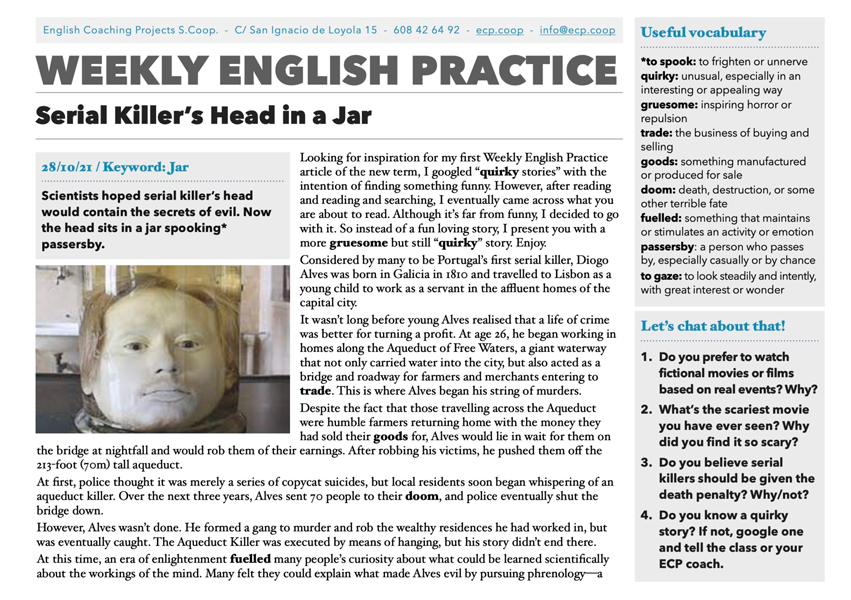 Serial Killer’s Head in a Jar

Scientists hoped serial killer’s head would contain the secrets of evil. Now the head sits in a jar spooking* passersby.

*to spook: to frighten or unnerve

quirky: unusual, especially in an interesting or appealing way

trade: the business of buying and selling

goods: something manufactured or produced for sale

doom: death, destruction, or some other terrible fate

fuelled: something that maintains or stimulates an activity or emotion

passersby: a person who passes by, especially casually or by chance

to gaze: to look steadily and intently, with great interest or wonder

Scientists hoped serial killer’s head would contain the secrets of evil. Now the head sits in a jar spooking* passersby.

Looking for inspiration for my first Weekly English Practice article of the new term, I googled “quirky stories” with the intention of finding something funny. However, after reading and reading and searching, I eventually came across what you are about to read. Although it’s far from funny, I decided to go with it. So instead of a fun loving story, I present you with a more gruesome but still “quirky” story. Enjoy.

Considered by many to be Portugal’s first serial killer, Diogo Alves was born in Galicia in 1810 and travelled to Lisbon as a young child to work as a servant in the affluent homes of the capital city.

It wasn’t long before young Alves realised that a life of crime was better for turning a profit. At age 26, he began working in homes along the Aqueduct of Free Waters, a giant waterway that not only carried water into the city, but also acted as a bridge and roadway for farmers and merchants entering to trade. This is where Alves began his string of murders.

Despite the fact that those travelling across the Aqueduct were humble farmers returning home with the money they had sold their goods for, Alves would lie in wait for them on the bridge at nightfall and would rob them of their earnings. After robbing his victims, he pushed them off the 213-foot (70m) tall aqueduct.

At first, police thought it was merely a series of copycat suicides, but local residents soon began whispering of an aqueduct killer. Over the next three years, Alves sent 70 people to their doom, and police eventually shut the bridge down.

However, Alves wasn’t done. He formed a gang to murder and rob the wealthy residences he had worked in, but was eventually caught. The Aqueduct Killer was executed by means of hanging, but his story didn’t end there.

At this time, an era of enlightenment fuelled many people’s curiosity about what could be learned scientifically about the workings of the mind. Many felt they could explain what made Alves evil by pursuing phrenology—a study of the bumps on one’s head. After Alves was dead, doctors severed his head and preserved it for study.

Though the secret to evil wasn’t discovered in the preserved head of Diogo Alves, the serial killer, even 180 years after his execution, still frightens unsuspecting passersby who meet his cold gaze. His perfectly preserved head sits in a glass jar at the University of Lisbon’s Faculty of Medicine.

The Killer Clown At Halloween

True Or False: Do You Believe The Stories?