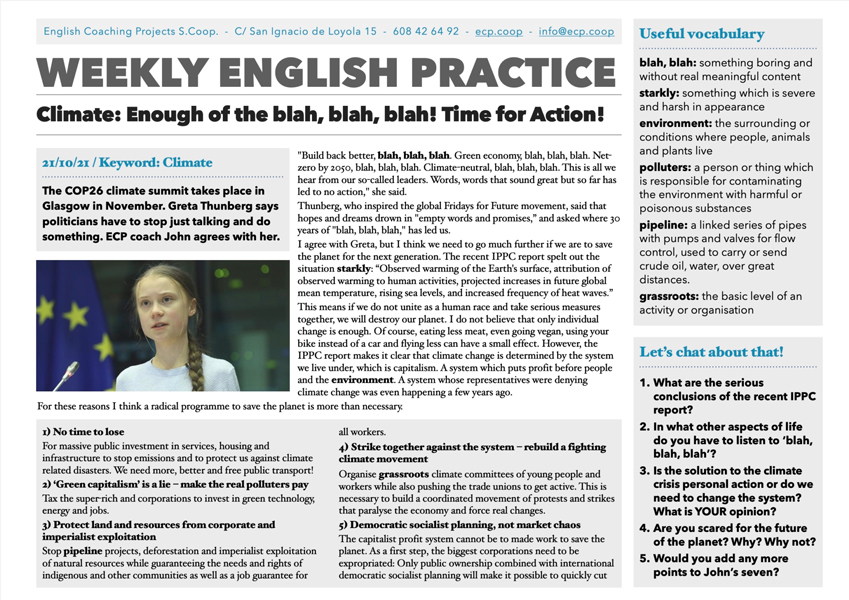 Climate: Enough of the blah, blah, blah! Time for Action!

The COP26 climate summit takes place in Glasgow in November. Greta Thunberg says politicians have to stop just talking and do something. ECP coach John agrees with her.

blah, blah: something boring and without real meaningful content

starkly: something which is severe and harsh in appearance

environment: the surrounding or conditions where people, animals and plants live

polluters: a person or thing which is responsible for contaminating the environment with harmful or poisonous substances

pipeline: a linked series of pipes with pumps and valves for flow control, used to carry or send crude oil, water, over great distances.

grassroots: the basic level of an activity or organisation

The COP26 climate summit takes place in Glasgow in November. Greta Thunberg says politicians have to stop just talking and do something. ECP coach John agrees with her.

Thunberg, who inspired the global Fridays for Future movement, said that hopes and dreams drown in “empty words and promises,” and asked where 30 years of “blah, blah, blah,” has led us.

I agree with Greta, but I think we need to go much further if we are to save the planet for the next generation. The recent IPPC report spelt out the situation starkly: “Observed warming of the Earth’s surface, attribution of observed warming to human activities, projected increases in future global mean temperature, rising sea levels, and increased frequency of heat waves.”

This means if we do not unite as a human race and take serious measures together, we will destroy our planet. I do not believe that only individual change is enough. Of course, eating less meat, even going vegan, using your bike instead of a car and flying less can have a small effect. However, the IPPC report makes it clear that climate change is determined by the system we live under, which is capitalism. A system which puts profit before people and the environment. A system whose representatives were denying climate change was even happening a few years ago.

For these reasons I think a radical programme to save the planet is more than necessary.

For massive public investment in services, housing and infrastructure to stop emissions and to protect us against climate related disasters. We need more, better and free public transport!

2) ‘Green capitalism’ is a lie – make the real polluters pay

Tax the super-rich and corporations to invest in green technology, energy and jobs.

3) Protect land and resources from corporate and imperialist exploitation

Stop pipeline projects, deforestation and imperialist exploitation of natural resources while guaranteeing the needs and rights of indigenous and other communities as well as a job guarantee for all workers.

4) Strike together against the system – rebuild a fighting climate movement

Organise grassroots climate committees of young people and workers while also pushing the trade unions to get active. This is necessary to build a coordinated movement of protests and strikes that paralyse the economy and force real changes.

The capitalist profit system cannot be to made work to save the planet. As a first step, the biggest corporations need to be expropriated: Only public ownership combined with international democratic socialist planning will make it possible to quickly cut emissions while guaranteeing a decent life and future for all.

6) Capitalism is destroying the planet and our jobs

With an overthrow of the current system and the end of exploitation of humans and nature, it will be possible to create millions of well-paid sustainable jobs and build a new green economy. Only without capitalism and imperialism can we end wars and conflicts and give a real answer to people who are forced to flee from their homes as a result of the climate crises.

Cancel all foreign debts and scrap patents on green technology as well as medical and pharmaceutical technology. Knowledge, skills and resources must be shared based on international workers’ solidarity and cooperation.

We are living through a decisive period in the fight against climate change, but world leaders continue to just ‘blah, blah’ and delay, with a lack of any meaningful action to prevent ecological disaster. The COP26 Climate Summit in Glasgow will be no exception to the rule. That is why I will be going with thousands of other people to Scotland to demonstrate for real change. If you want to go too, let me know or click on the following link: #COP26Glasgow Mobilisations

How We Talk About The Environment

Could our digital records disappear in a disaster or an attack?