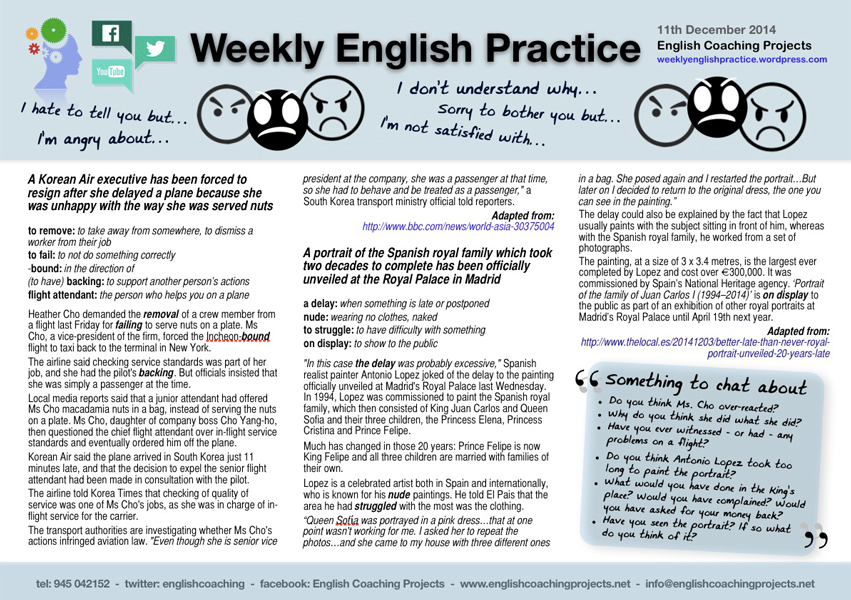 Look at the vocabulary below and check you understand it. Then listen to and read the two news stories.

to remove: to take away from somewhere, to dismiss a worker from their job

to fail: to not do something correctly

–bound: in the direction of

(to have) backing: to support another person’s actions

flight attendant: the person who helps you on a plane

a delay: when something is late or postponed

to struggle: to have difficulty with something

on display: to show to the public

Heather Cho demanded the removal of a crew member from a flight last Friday for failing to serve nuts on a plate. Ms Cho, a vice-president of the firm, forced the Incheon-bound flight to taxi back to the terminal in New York.

The airline said checking service standards was part of her job, and she had the pilot’s backing. But officials insisted that she was simply a passenger at the time.

Local media reports said that a junior attendant had offered Ms Cho macadamia nuts in a bag, instead of serving the nuts on a plate. Ms Cho, daughter of company boss Cho Yang-ho, then questioned the chief flight attendant over in-flight service standards and eventually ordered him off the plane.

Korean Air said the plane arrived in South Korea just 11 minutes late, and that the decision to expel the senior flight attendant had been made in consultation with the pilot.

The airline told Korea Times that checking of quality of service was one of Ms Cho’s jobs, as she was in charge of in-flight service for the carrier.

The transport authorities are investigating whether Ms Cho’s actions infringed aviation law. “Even though she is senior vice president at the company, she was a passenger at that time, so she had to behave and be treated as a passenger,” a South Korea transport ministry official told reporters.

“In this case the delay was probably excessive,” Spanish realist painter Antonio Lopez joked of the delay to the painting officially unveiled at Madrid’s Royal Palace last Wednesday.

In 1994, Lopez was commissioned to paint the Spanish royal family, which then consisted of King Juan Carlos and Queen Sofia and their three children, the Princess Elena, Princess Cristina and Prince Felipe.

Much has changed in those 20 years: Prince Felipe is now King Felipe and all three children are married with families of their own.

Lopez is a celebrated artist both in Spain and internationally, who is known for his nude paintings. He told El Pais that the area he had struggled with the most was the clothing.

“Queen Sofía was portrayed in a pink dress…that at one point wasn’t working for me. I asked her to repeat the photos…and she came to my house with three different ones in a bag. She posed again and I restarted the portrait…But later on I decided to return to the original dress, the one you can see in the painting.”

The delay could also be explained by the fact that Lopez usually paints with the subject sitting in front of him, whereas with the Spanish royal family, he worked from a set of photographs.

The painting, at a size of 3 x 3.4 metres, is the largest ever completed by Lopez and cost over €300,000. It was commissioned by Spain’s National Heritage agency. ‘Portrait of the family of Juan Carlos I (1994-2014)’ is on display to the public as part of an exhibition of other royal portraits at Madrid’s Royal Palace until April 19th next year.