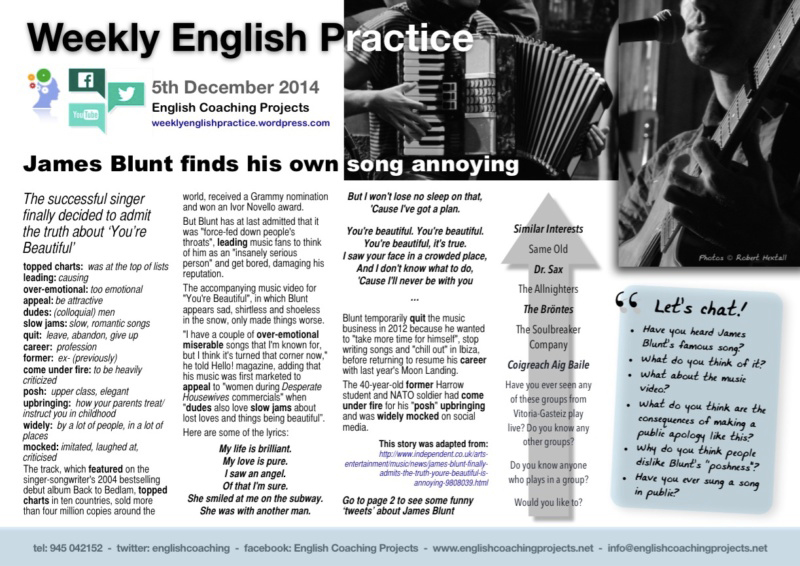 Look at the following vocabulary before you read and listen to the story:

topped charts:  was at the top of lists

quit:  leave, abandon, give up

come under fire: to be heavily criticized

upbringing:  how your parents treat/instruct you in childhood

The track, which featured on the singer-songwriter’s 2004 bestselling debut album Back to Bedlam, topped charts in ten countries, sold more than four million copies around the world, received a Grammy nomination and won an Ivor Novello award.

But Blunt has at last admitted that it was “force-fed down people’s throats”, leading music fans to think of him as an “insanely serious person” and get bored, damaging his reputation.

The accompanying music video for “You’re Beautiful”, in which Blunt appears sad, shirtless and shoeless in the snow, only made things worse.

“I have a couple of over-emotional miserable songs that I’m known for, but I think it’s turned that corner now,” he told Hello! magazine, adding that his music was first marketed to appeal to “women during Desperate Housewives commercials” when “dudes also love slow jams about lost loves and things being beautiful”.

Here are some of the lyrics:

My life is brilliant.

My love is pure.

I saw an angel.

Of that I’m sure.

She smiled at me on the subway.

She was with another man.

But I won’t lose no sleep on that,

I saw your face in a crowded place,

And I don’t know what to do,

‘Cause I’ll never be with you

Blunt temporarily quit the music business in 2012 because he wanted to “take more time for himself”, stop writing songs and “chill out” in Ibiza, before returning to resume his career with last year’s Moon Landing.

The 40-year-old former Harrow student and NATO soldier had come under fire for his “posh” upbringing and was widely mocked on social media.

This story was adapted from: