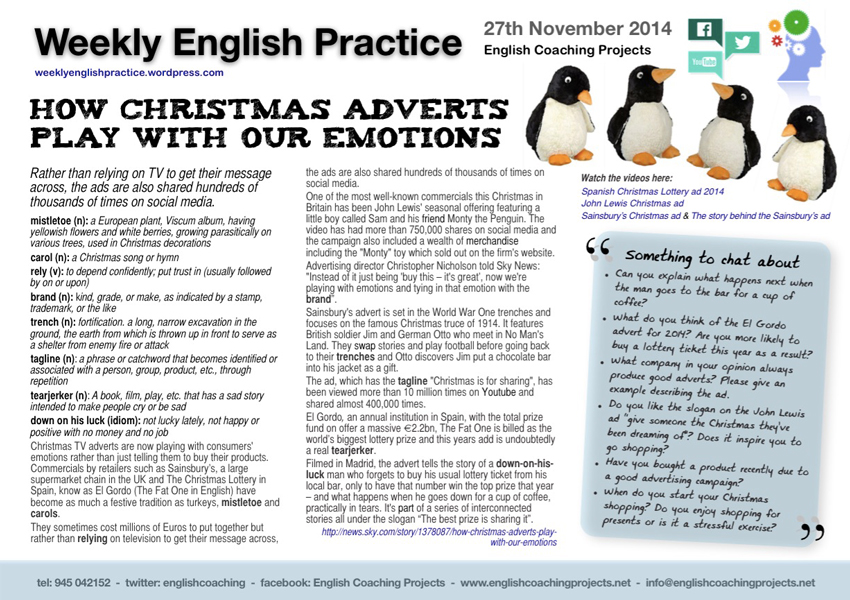 Rather than relying on TV to get their message across, the ads are also shared hundreds of thousands of times on social media.

rely (v): to depend confidently; put trust in (usually followed by on or upon)

brand (n): kind, grade, or make, as indicated by a stamp, trademark, or the like

trench (n): fortification. a long, narrow excavation in the ground, the earth from which is thrown up in front to serve as a shelter from enemy fire or attack

tagline (n): a phrase or catchword that becomes identified or associated with a person, group, product, etc., through repetition

tearjerker (n): A book, film, play, etc. that has a sad story intended to make people cry or be sad

down on his luck (idiom): not lucky lately, not happy or positive with no money and no job

Christmas TV adverts are now playing with consumers’ emotions rather than just telling them to buy their products. Commercials by retailers such as Sainsbury’s, a large supermarket chain in the UK and The Christmas Lottery in Spain, know as El Gordo (The Fat One in English) have become as much a festive tradition as turkeys, mistletoe and carols.

They sometimes cost millions of Euros to put together but rather than relying on television to get their message across, the ads are also shared hundreds of thousands of times on social media.

One of the most well-known commercials this Christmas in Britain has been John Lewis’ seasonal offering featuring a little boy called Sam and his friend Monty the Penguin. The video has had more than 750,000 shares on social media and the campaign also included a wealth of merchandise including the “Monty” toy which sold out on the firm’s website.

Advertising director Christopher Nicholson told Sky News: “Instead of it just being ‘buy this – it’s great’, now we’re playing with emotions and tying in that emotion with the brand”.

Sainsbury’s advert is set in the World War One trenches and focuses on the famous Christmas truce of 1914. It features British soldier Jim and German Otto who meet in No Man’s Land. They swap stories and play football before going back to their trenches and Otto discovers Jim put a chocolate bar into his jacket as a gift.

The ad, which has the tagline “Christmas is for sharing”, has been viewed more than 10 million times on Youtube and shared almost 400,000 times.

El Gordo, an annual institution in Spain, with the total prize fund on offer a massive €2.2bn, The Fat One is billed as the world’s biggest lottery prize and this years add is undoubtedly a real tearjerker.

Filmed in Madrid, the advert tells the story of a down-on-his-luck man who forgets to buy his usual lottery ticket from his local bar, only to have that number win the top prize that year – and what happens when he goes down for a cup of coffee, practically in tears. It’s part of a series of interconnected stories all under the slogan “The best prize is sharing it”.