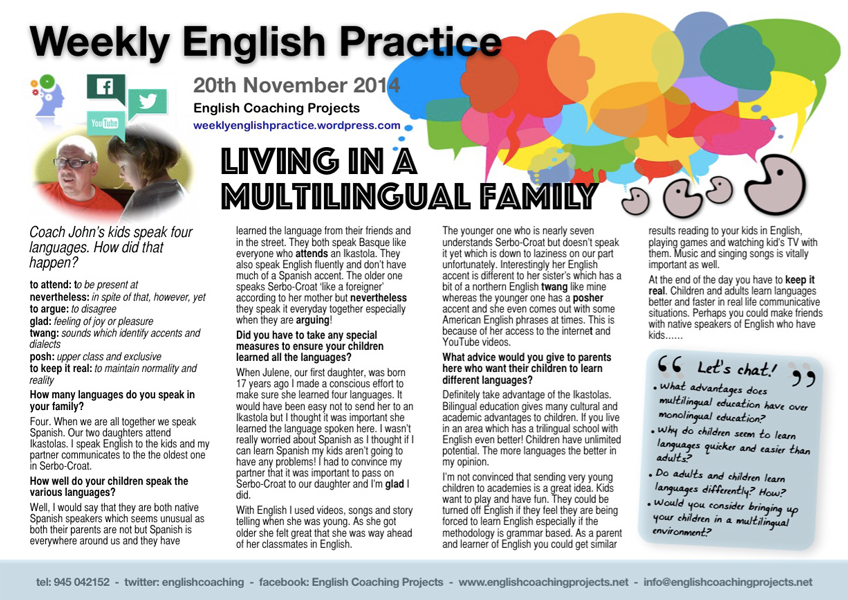 Coach John’s kids speak four languages. How did that happen?

to attend: to be present at

nevertheless: in spite of that, however, yet

to argue: to disagree

glad: feeling of joy or pleasure

to keep it real: to maintain normality and reality

How many languages do you speak in your family?

Four. When we are all together we speak Spanish. Our two daughters attend Ikastolas. I speak English to the kids and my partner communicates to the the oldest one in Serbo-Croat.

How well do your children speak the various languages?

Well, I would say that they are both native Spanish speakers which seems unusual as both their parents are not but Spanish is everywhere around us and they have learned the language from their friends and in the street. They both speak Basque like everyone who attends an Ikastola. They also speak English fluently and don’t have much of a Spanish accent. The older one speaks Serbo-Croat ‘like a foreigner’ according to her mother but nevertheless they speak it everyday together especially when they are arguing!

Did you have to take any special measures to ensure your children learned all the languages?

When Julene, our first daughter, was born 17 years ago I made a conscious effort to make sure she learned four languages. It would have been easy not to send her to an Ikastola but I thought it was important she learned the language spoken here. I wasn’t really worried about Spanish as I thought if I can learn Spanish my kids aren’t going to have any problems! I had to convince my partner that it was important to pass on Serbo-Croat to our daughter and I’m glad I did.

With English I used videos, songs and story telling when she was young. As she got older she felt great that she was way ahead of her classmates in English.

The younger one who is nearly seven understands Serbo-Croat but doesn’t speak it yet which is down to laziness on our part unfortunately. Interestingly her English accent is different to her sister’s which has a bit of a northern English twang like mine whereas the younger one has a posher accent and she even comes out with some American English phrases at times. This is because of her access to the internet and YouTube videos.

What advice would you give to parents here who want their children to learn different languages?

Definitely take advantage of the Ikastolas. Bilingual education gives many cultural and academic advantages to children. If you live in an area which has a trilingual school with English even better! Children have unlimited potential. The more languages the better in my opinion.

I’m not convinced that sending very young children to academies is a great idea. Kids want to play and have fun. They could be turned off English if they feel they are being forced to learn English especially if the methodology is grammar based. As a parent and learner of English you could get similar results reading to your kids in English, playing games and watching kid’s TV with them. Music and singing songs is vitally important as well.

At the end of the day you have to keep it real. Children and adults learn languages better and faster in real life communicative situations. Perhaps you could make friends with native speakers of English who have kids……

“Something to chat about”