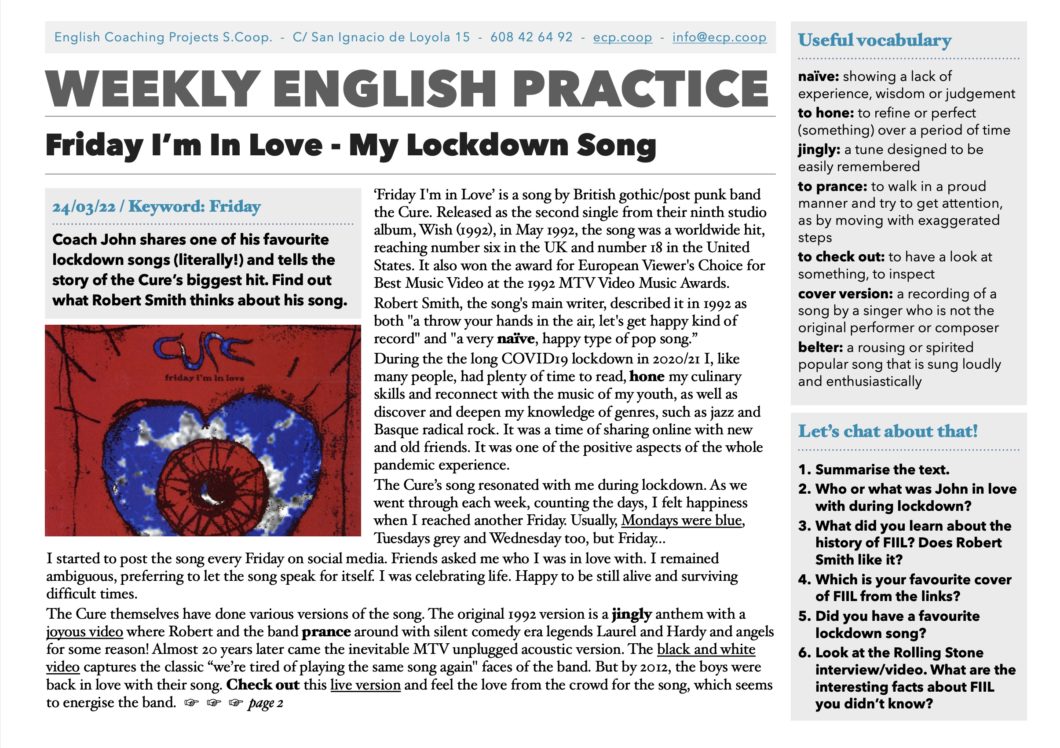 Coach John shares one of his favourite lockdown songs (literally!) and tells the story of the Cure’s biggest hit. Find out what Robert Smith thinks about his song.

naïve: showing a lack of experience, wisdom or judgement

to hone: to refine or perfect (something) over a period of time

jingly: a tune designed to be easily remembered

to prance: to walk in a proud manner and try to get attention, as by moving with exaggerated steps

to check out: to have a look at something, to inspect

cover version: a recording of a song by a singer who is not the original performer or composer

belter: a rousing or spirited popular song that is sung loudly and enthusiastically

Coach John shares one of his favourite lockdown songs (literally!) and tells the story of the Cure’s biggest hit. Find out what Robert Smith thinks about his song.

‘Friday I’m in Love’ is a song by British gothic/post punk band the Cure. Released as the second single from their ninth studio album, Wish (1992), in May 1992, the song was a worldwide hit, reaching number six in the UK and number 18 in the United States. It also won the award for European Viewer’s Choice for Best Music Video at the 1992 MTV Video Music Awards.

Robert Smith, the song’s main writer, described it in 1992 as both “a throw your hands in the air, let’s get happy kind of record” and “a very naïve, happy type of pop song.”

During the the long COVID19 lockdown in 2020/21 I, like many people, had plenty of time to read, hone my culinary skills and reconnect with the music of my youth, as well as discover and deepen my knowledge of genres, such as jazz and Basque radical rock. It was a time of sharing online with new and old friends. It was one of the positive aspects of the whole pandemic experience.

The Cure’s song resonated with me during lockdown. As we went through each week, counting the days, I felt happiness when I reached another Friday. Usually, Mondays were blue, Tuesdays grey and Wednesday too, but Friday…

I started to post the song every Friday on social media. Friends asked me who I was in love with. I remained ambiguous, preferring to let the song speak for itself. I was celebrating life. Happy to be still alive and surviving difficult times.

The Cure themselves have done various versions of the song. The original 1992 version is a jingly anthem with a joyous video where Robert and the band prance around with silent comedy era legends Laurel and Hardy and angels for some reason! Almost 20 years later came the inevitable MTV unplugged acoustic version. The black and white video captures the classic “we’re tired of playing the same song again” faces of the band. But by 2012, the boys were back in love with their song. Check out this live version and feel the love from the crowd for the song, which seems to energise the band.

Obviously, I couldn’t post the same few Cure versions of the song every Friday, so with time on my hands I looked for cover versions. I wasn’t previously a big fan of covers, but I’ve learned to love and appreciate them and there are some belter versions of FIIL.

Inevitably, there are various ukulele versions. This is one of the best and comes with video clips of the movie ‘Her’ for some reason.

If you prefer a melancholic mandolin vibe, this version by Janet Devlin is for you.

If you want a pick-me-up after that, the sheer collective joy of The Popup Choir from the Netherlands will do it.

For weirdness you can’t top Puddles, who channels his inner Springsteen with a mouth organ intro. Surprisingly, it works well.

Some famous bands have also covered the song. Here are three of the best: This, by Yo La Tengo is sublime. The Stereophonics, of course, give us an awesome version. Indie legends from Leeds, the Kaiser Chiefs and their singer Ricky Wilson lend their distinctive voice on this impromptu version of FIIL.

The song has taken on a life of its own and YouTube is full of great covers by unknown artists. This is one of my favourites: Just a guy in his bedroom with his guitar, yodelling away.

Robert Smith revealed in a Rolling Stone interview that he has a love-hate relationship with FIIL and considered it just another, ‘dumb pop song.’

No matter Robert, we love your dark and sad songs too, but there’s nothing wrong with a silly love song sometimes.

There’s even a version recorded in Salburua. The young guitarist Karla is great, but the less said about the singer the better…

Can Anybody Learn To Be A DJ?