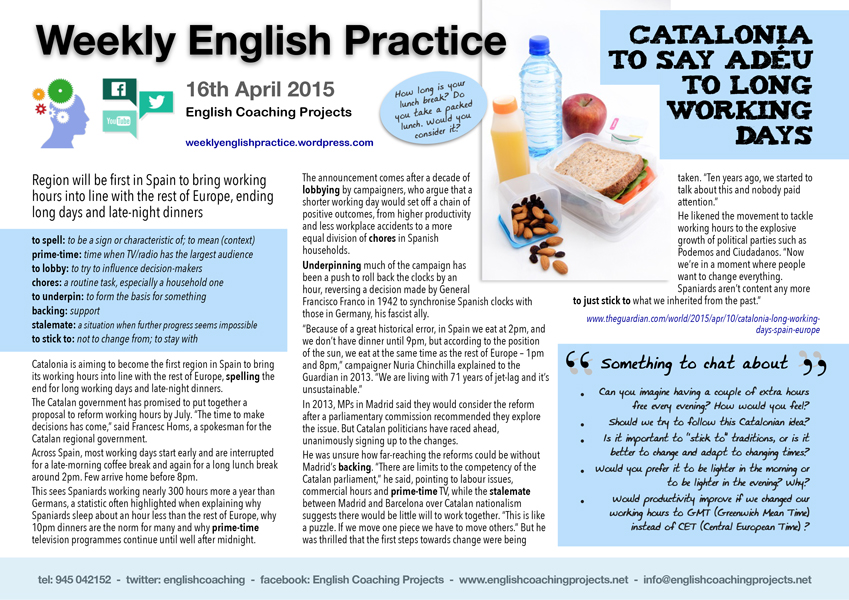 to spell: to be a sign or characteristic of; to mean (context)

prime-time: time when TV/radio has the largest audience

to lobby: to try to influence decision-makers

chores: a routine task, especially a household one

to underpin: to form the basis for something

to stick to: not to change from; to stay with

Region will be first in Spain to bring working hours into line with the rest of Europe, ending long days and late-night dinners

Catalonia is aiming to become the first region in Spain to bring its working hours into line with the rest of Europe, spelling the end for long working days and late-night dinners.

The Catalan government has promised to put together a proposal to reform working hours by July. “The time to make decisions has come,” said Francesc Homs, a spokesman for the Catalan regional government.

Across Spain, most working days start early and are interrupted for a late-morning coffee break and again for a long lunch break around 2pm. Few arrive home before 8pm.

This sees Spaniards working nearly 300 hours more a year than Germans, a statistic often highlighted when explaining why Spaniards sleep about an hour less than the rest of Europe, why 10pm dinners are the norm for many and why prime-time television programmes continue until well after midnight.

The announcement comes after a decade of lobbying by campaigners, who argue that a shorter working day would set off a chain of positive outcomes, from higher productivity and less workplace accidents to a more equal division of chores in Spanish households.

Underpinning much of the campaign has been a push to roll back the clocks by an hour, reversing a decision made by General Francisco Franco in 1942 to synchronise Spanish clocks with those in Germany, his fascist ally.

“Because of a great historical error, in Spain we eat at 2pm, and we don’t have dinner until 9pm, but according to the position of the sun, we eat at the same time as the rest of Europe – 1pm and 8pm,” campaigner Nuria Chinchilla explained to the Guardian in 2013. “We are living with 71 years of jet-lag and it’s unsustainable.”

In 2013, MPs in Madrid said they would consider the reform after a parliamentary commission recommended they explore the issue. But Catalan politicians have raced ahead, unanimously signing up to the changes.

He was unsure how far-reaching the reforms could be without Madrid’s backing. “There are limits to the competency of the Catalan parliament,” he said, pointing to labour issues, commercial hours and prime-time TV, while the stalemate between Madrid and Barcelona over Catalan nationalism suggests there would be little will to work together. “This is like a puzzle. If we move one piece we have to move others.” But he was thrilled that the first steps towards change were being taken. “Ten years ago, we started to talk about this and nobody paid attention.”

He likened the movement to tackle working hours to the explosive growth of political parties such as Podemos and Ciudadanos. “Now we’re in a moment where people want to change everything. Spaniards aren’t content any more to just stick to what we inherited from the past.”