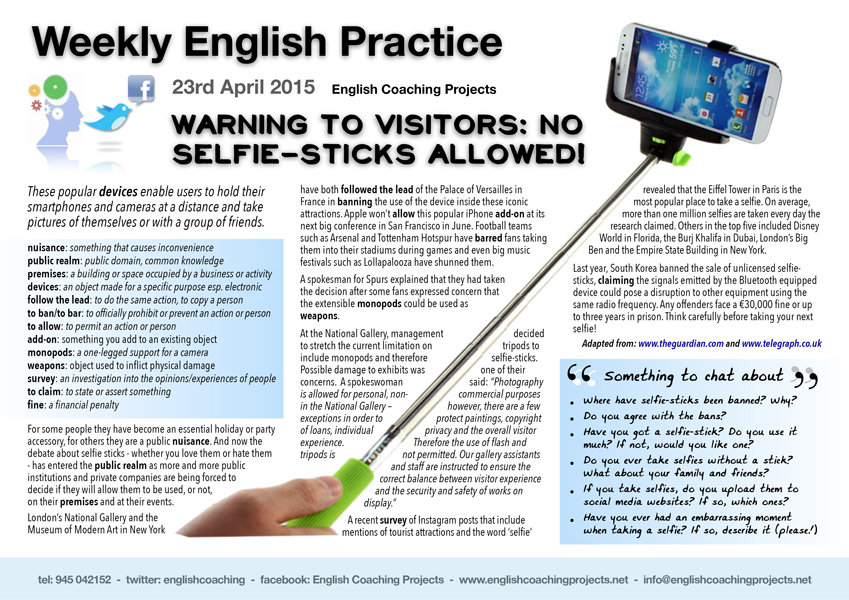 nuisance: something that causes inconvenience

premises: a building or space occupied by a business or activity

devices: an object made for a specific purpose esp. electronic

follow the lead: to do the same action, to copy a person

to ban/to bar: to officially prohibit or prevent an action or person

to allow: to permit an action or person

add-on: something you add to an existing object

monopods: a one-legged support for a camera

survey: an investigation into the opinions/experiences of people

to claim: to state or assert something

These popular devices enable users to hold their smartphones and cameras at a distance and take pictures of themselves or with a group of friends.

For some people they have become an essential holiday or party accessory, for others they are a public nuisance. And now the debate about selfie sticks – whether you love them or hate them – has entered the public realm as more and more public institutions and private companies are being forced to decide if they will allow them to be used, or not, on their premises and at their events.

London’s National Gallery and the Museum of Modern Art in New York have both followed the lead of the Palace of Versailles in France in banning the use of the device inside these iconic attractions. Apple won’t allow this popular iPhone add-on at its next big conference in San Francisco in June. Football teams such as Arsenal and Tottenham Hotspur have barred fans taking them into their stadiums during games and even big music festivals such as Lollapalooza have shunned them.

A spokesman for Spurs explained that they had taken the decision after some fans expressed concern that the extensible monopods could be used as weapons.

At the National Gallery, management decided to stretch the current limitation on tripods to include monopods and therefore selfie-sticks. Possible damage to exhibits was one of their concerns.  A spokeswoman said: “Photography is allowed for personal, non-commercial purposes in the National Gallery – however, there are a few exceptions in order to protect paintings, copyright of loans, individual privacy and the overall visitor experience. Therefore the use of flash and tripods is not permitted. Our gallery assistants and staff are instructed to ensure the correct balance between visitor experience and the security and safety of works on display.”

A recent survey of Instagram posts that include mentions of tourist attractions and the word ‘selfie’ revealed that the Eiffel Tower in Paris is the most popular place to take a selfie. On average, more than one million selfies are taken every day the research claimed. Others in the top five included Disney World in Florida, the Burj Khalifa in Dubai, London’s Big Ben and the Empire State Building in New York.

Last year, South Korea banned the sale of unlicensed selfie-sticks, claiming the signals emitted by the Bluetooth equipped device could pose a disruption to other equipment using the same radio frequency. Any offenders face a €30,000 fine or up to three years in prison. Think carefully before taking your next selfie!

Adapted from: www.theguardian.com and www.telegraph.co.uk