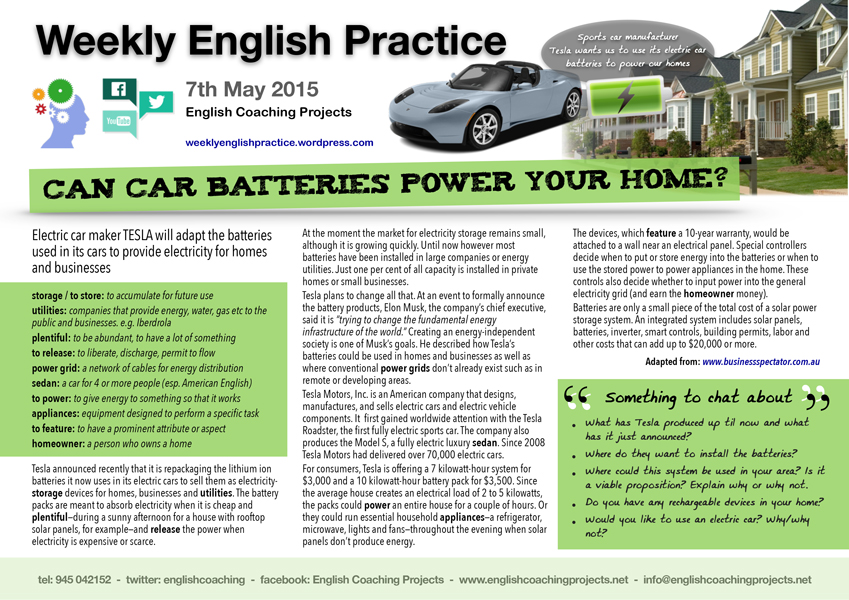 storage / to store: to accumulate for future use

plentiful: to be abundant, to have a lot of something

to release: to liberate, discharge, permit to flow

power grid: a network of cables for energy distribution

sedan: a car for 4 or more people (esp. American English)

to power: to give energy to something so that it works

to feature: to have a prominent attribute or aspect

homeowner: a person who owns a home

Tesla announced recently that it is repackaging the lithium ion batteries it now uses in its electric cars to sell them as electricity-storage devices for homes, businesses and utilities. The battery packs are meant to absorb electricity when it is cheap and plentiful—during a sunny afternoon for a house with rooftop solar panels, for example—and release the power when electricity is expensive or scarce.

At the moment the market for electricity storage remains small, although it is growing quickly. Until now however most batteries have been installed in large companies or energy utilities. Just one per cent of all capacity is installed in private homes or small businesses.

Tesla plans to change all that. At an event to formally announce the battery products, Elon Musk, the company’s chief executive, said it is “trying to change the fundamental energy infrastructure of the world.” Creating an energy-independent society is one of Musk’s goals. He described how Tesla’s batteries could be used in homes and businesses as well as where conventional power grids don’t already exist such as in remote or developing areas.

For consumers, Tesla is offering a 7 kilowatt-hour system for $3,000 and a 10 kilowatt-hour battery pack for $3,500. Since the average house creates an electrical load of 2 to 5 kilowatts, the packs could power an entire house for a couple of hours. Or they could run essential household appliances—a refrigerator, microwave, lights and fans—throughout the evening when solar panels don’t produce energy.

The devices, which feature a 10-year warranty, would be attached to a wall near an electrical panel. Special controllers decide when to put or store energy into the batteries or when to use the stored power to power appliances in the home. These controls also decide whether to input power into the general electricity grid (and earn the homeowner money).

Batteries are only a small piece of the total cost of a solar power storage system. An integrated system includes solar panels, batteries, inverter, smart controls, building permits, labor and other costs that can add up to $20,000 or more.