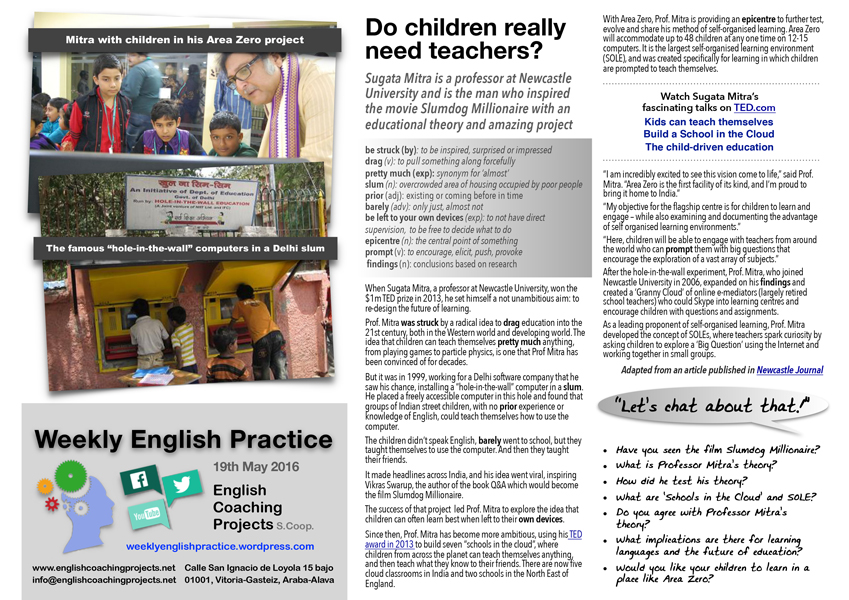 be struck (by): to be inspired, surprised or impressed

drag (v): to pull something along forcefully

pretty much (exp): synonym for ‘almost’

prior (adj): existing or coming before in time

barely (adv): only just, almost not

be left to your own devices (exp): to not have direct supervision,  to be free to decide what to do

epicentre (n): the central point of something

findings (n): conclusions based on research

When Sugata Mitra, a professor at Newcastle University, won the $1m TED prize in 2013, he set himself a not unambitious aim: to re-design the future of learning.

Prof. Mitra was struck by a radical idea to drag education into the 21st century, both in the Western world and developing world. The idea that children can teach themselves pretty much anything, from playing games to particle physics, is one that Prof Mitra has been convinced of for decades.

But it was in 1999, working for a Delhi software company that he saw his chance, installing a “hole-in-the-wall” computer in a slum. He placed a freely accessible computer in this hole and found that groups of Indian street children, with no prior experience or knowledge of English, could teach themselves how to use the computer.

It made headlines across India, and his idea went viral, inspiring Vikras Swarup, the author of the book Q&A which would become the film Slumdog Millionaire.

The success of that project  led Prof. Mitra to explore the idea that children can often learn best when left to their own devices.

Since then, Prof. Mitra has become more ambitious, using his TED award in 2013 to build seven “schools in the cloud”, where children from across the planet can teach themselves anything, and then teach what they know to their friends. There are now five cloud classrooms in India and two schools in the North East of England.

“I am incredibly excited to see this vision come to life,” said Prof. Mitra. “Area Zero is the first facility of its kind, and I’m proud to bring it home to India.”

“My objective for the flagship centre is for children to learn and engage – while also examining and documenting the advantage of self organised learning environments.”

“Here, children will be able to engage with teachers from around the world who can prompt them with big questions that encourage the exploration of a vast array of subjects.”

After the hole-in-the-wall experiment, Prof. Mitra, who joined Newcastle University in 2006, expanded on his findings and created a ‘Granny Cloud’ of online e-mediators (largely retired school teachers) who could Skype into learning centres and encourage children with questions and assignments.

As a leading proponent of self-organised learning, Prof. Mitra developed the concept of SOLEs, where teachers spark curiosity by asking children to explore a ‘Big Question’ using the Internet and working together in small groups.

Adapted from an article published in Newcastle Journal