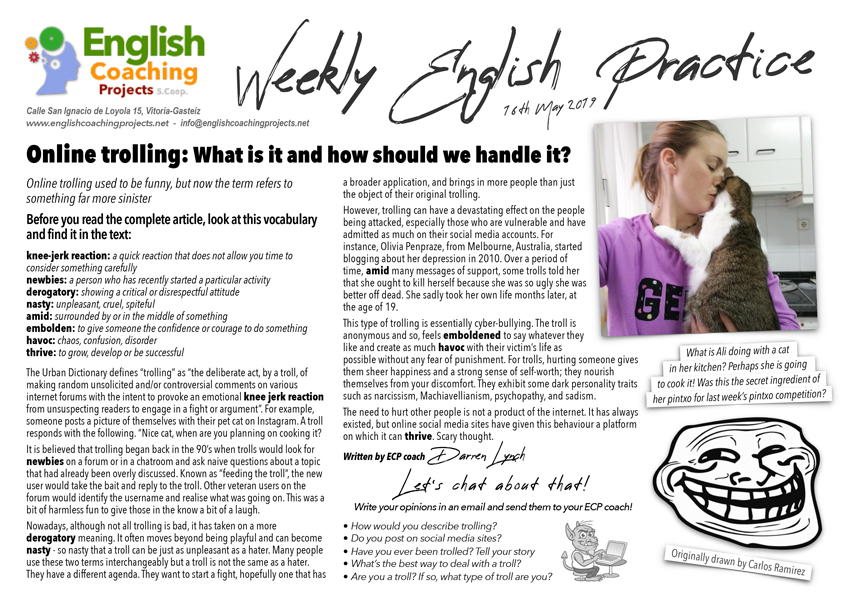 In this week’s Weekly English Practice, ECP coach Darren talks about online trolling, its origins and how it has changed from being a fun but harmless activity to become a damaging and harmful problem.

Online trolling used to be funny, but now the term refers to something far more sinister

knee-jerk reaction: a quick reaction that does not allow you time to consider something carefully

newbie: a person who has recently started a particular activity

amid: surrounded by or in the middle of something

embolden: to give someone the confidence or courage to do something

thrive: to grow, develop or be successful

The Urban Dictionary defines “trolling” as “the deliberate act, by a troll, of making random unsolicited and/or controversial comments on various internet forums with the intent to provoke an emotional knee-jerk reaction from unsuspecting readers to engage in a fight or argument”. For example, someone posts a picture of themselves with their pet cat on Instagram. A troll responds with the following. “Nice cat, when are you planning on cooking it?

It is believed that trolling began back in the 90’s when trolls would look for newbies on a forum or in a chatroom and ask naive questions about a topic that had already been overly discussed. Known as “feeding the troll”, the new user would take the bait and reply to the troll. Other veteran users on the forum would identify the username and realise what was going on. This was a bit of harmless fun to give those in the know a bit of a laugh.

Nowadays, although not all trolling is bad, it has taken on a more derogatory meaning. It often moves beyond being playful and can become nasty – so nasty that a troll can be just as unpleasant as a hater. Many people use these two terms interchangeably but a troll is not the same as a hater. They have a different agenda. They want to start a fight, hopefully one that has a broader application, and brings in more people than just the object of their original trolling.

However, trolling can have a devastating effect on the people being attacked, especially those who are vulnerable and have admitted as much on their social media accounts. For instance, Olivia Penpraze, from Melbourne, Australia, started blogging about her depression in 2010. Over a period of time, amid many messages of support, some trolls told her that she ought to kill herself because she was so ugly she was better off dead. She sadly took her own life months later, at the age of 19.

This type of trolling is essentially cyber-bullying. The troll is anonymous and so, feels emboldened to say whatever they like and create as much havoc with their victim’s life as possible without any fear of punishment. For trolls, hurting someone gives them sheer happiness and a strong sense of self-worth; they nourish themselves from your discomfort. They exhibit some dark personality traits such as narcissism, Machiavellianism, psychopathy, and sadism.

The need to hurt other people is not a product of the internet. It has always existed, but online social media sites have given this behaviour a platform on which it can thrive. Scary thought.