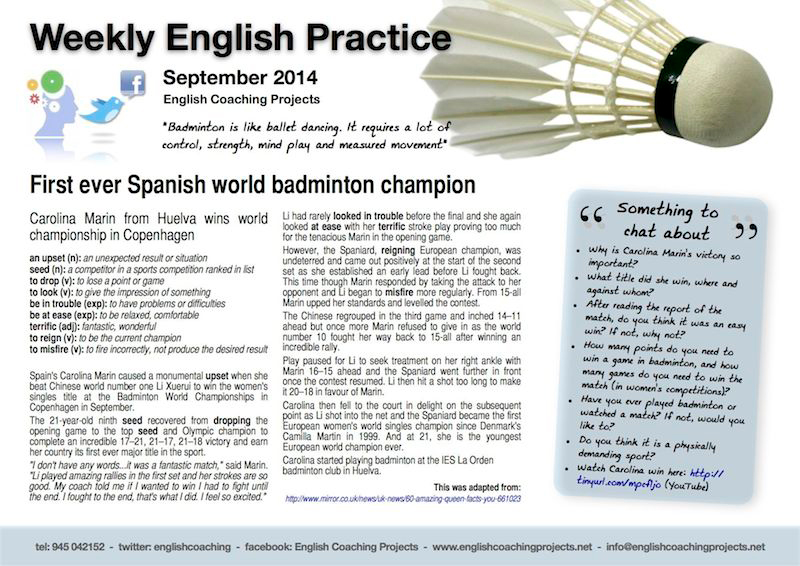 Look at this vocabulary before you read and listen to the article:

an upset (n): an unexpected result or situation

seed (n): a competitor in a sports competition ranked in list

to look (v): to give the impression of something

be in trouble (exp): to have problems or difficulties

be at ease (exp): to be relaxed, comfortable

to reign (v): to be the current champion

to misfire (v): to fire incorrectly, not produce the desired result

Spain’s Carolina Marin caused a monumental upset when she beat Chinese world number one Li Xuerui to win the women’s singles title at the Badminton World Championships in Copenhagen in September.

The 21-year-old ninth seed recovered from dropping the opening game to the top seed and Olympic champion to complete an incredible 17-21, 21-17, 21-18 victory and earn her country its first ever major title in the sport.

“I don’t have any words…it was a fantastic match,” said Marin. “Li played amazing rallies in the first set and her strokes are so good. My coach told me if I wanted to win I had to fight until the end. I fought to the end, that’s what I did. I feel so excited.”

Li had rarely looked in trouble before the final and she again looked at ease with her terrific stroke play proving too much for the tenacious Marin in the opening game.

However, the Spaniard, reigning European champion, was undeterred and came out positively at the start of the second set as she established an early lead before Li fought back. This time though Marin responded by taking the attack to her opponent and Li began to misfire more regularly. From 15-all Marin upped her standards and levelled the contest.

The Chinese regrouped in the third game and inched 14-11 ahead but once more Marin refused to give in as the world number 10 fought her way back to 15-all after winning an incredible rally.

Play paused for Li to seek treatment on her right ankle with Marin 16-15 ahead and the Spaniard went further in front once the contest resumed. Li then hit a shot too long to make it 20-18 in favour of Marin.

Carolina then fell to the court in delight on the subsequent point as Li shot into the net and the Spaniard became the first European women’s world singles champion since Denmark’s Camilla Martin in 1999. And at 21, she is the youngest European world champion ever.

Write your answers in an email an send them to your ECP coach!

This was adapted from: