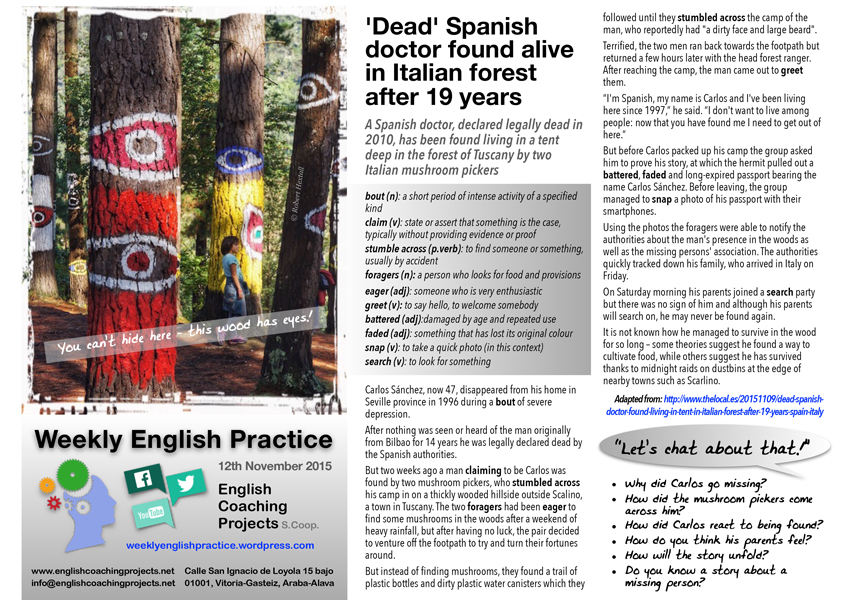 A Spanish doctor, declared legally dead in 2010, has been found living in a tent deep in the forest of Tuscany by two Italian mushroom pickers

bout (n): a short period of intense activity of a specified kind

claim (v): state or assert that something is the case, typically without providing evidence or proof

stumble across (p.verb): to find someone or something, usually by accident

foragers (n): a person who looks for food and provisions

eager (adj): someone who is very enthusiastic

greet (v): to say hello, to welcome somebody

battered (adj):damaged by age and repeated use

faded (adj): something that has lost its original colour

snap (v): to take a quick photo (in this context)

search (v): to look for something

Carlos Sánchez, now 47, disappeared from his home in Seville province in 1996 during a bout of severe depression.

After nothing was seen or heard of the man originally from Bilbao for 14 years he was legally declared dead by the Spanish authorities.

But two weeks ago a man claiming to be Carlos was found by two mushroom pickers, who stumbled across his camp in on a thickly wooded hillside outside Scalino, a town in Tuscany. The two foragers had been eager to find some mushrooms in the woods after a weekend of heavy rainfall, but after having no luck, the pair decided to venture off the footpath to try and turn their fortunes around.

But instead of finding mushrooms, they found a trail of plastic bottles and dirty plastic water canisters which they followed until they stumbled across the camp of the man, who reportedly had “a dirty face and large beard”.

Terrified, the two men ran back towards the footpath but returned a few hours later with the head forest ranger. After reaching the camp, the man came out to greet them.

“I’m Spanish, my name is Carlos and I’ve been living here since 1997,” he said. “I don’t want to live among people: now that you have found me I need to get out of here.”

But before Carlos packed up his camp the group asked him to prove his story, at which the hermit pulled out a battered, faded and long-expired passport bearing the name Carlos Sánchez. Before leaving, the group managed to snap a photo of his passport with their smartphones.

Using the photos the foragers were able to notify the authorities about the man’s presence in the woods as well as the missing persons’ association. The authorities quickly tracked down his family, who arrived in Italy on Friday.

On Saturday morning his parents joined a search party but there was no sign of him and although his parents will search on, he may never be found again.

It is not known how he managed to survive in the wood for so long – some theories suggest he found a way to cultivate food, while others suggest he has survived thanks to midnight raids on dustbins at the edge of nearby towns such as Scarlino.