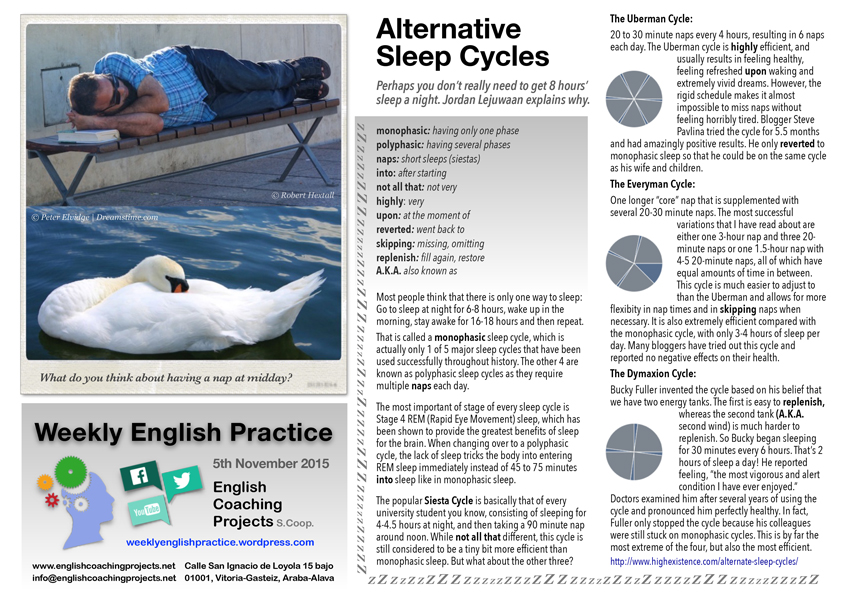 Perhaps you don’t really need to get 8 hours’ sleep a night. Jordan Lejuwaan explains why

monophasic: having only one phase

not all that: not very

upon: at the moment of

reverted: went back to

A.K.A. also known as

Most people think that there is only one way to sleep: Go to sleep at night for 6-8 hours, wake up in the morning, stay awake for 16-18 hours and then repeat.

The most important of stage of every sleep cycle is Stage 4 REM (Rapid Eye Movement) sleep, which has been shown to provide the greatest benefits of sleep for the brain. When changing over to a polyphasic cycle, the lack of sleep tricks the body into entering REM sleep immediately instead of 45 to 75 minutes into sleep like in monophasic sleep.

The popular Siesta Cycle is basically that of every university student you know, consisting of sleeping for 4-4.5 hours at night, and then taking a 90 minute nap around noon. While not all that different, this cycle is still considered to be a tiny bit more efficient than monophasic sleep. But what about the other three?

20 to 30 minute naps every 4 hours, resulting in 6 naps each day. The Uberman cycle is highly efficient, and usually results in feeling healthy,  feeling refreshed upon waking and extremely vivid dreams. However, the rigid schedule makes it almost impossible to miss naps without feeling horribly tired. Blogger Steve Pavlina tried the cycle for 5.5 months and had amazingly positive results. He only reverted to monophasic sleep so that he could be on the same cycle as his wife and children.

One longer “core” nap that is supplemented with several 20-30 minute naps. The most successful variations that I have read about are either one 3-hour nap and three 20-minute naps or one 1.5-hour nap with 4-5 20-minute naps, all of which have equal amounts of time in between. This cycle is much easier to adjust to than the Uberman and allows for more flexibity in nap times and in skipping naps when necessary. It is also extremely efficient compared with the monophasic cycle, with only 3-4 hours of sleep per day. Many bloggers have tried out this cycle and reported no negative effects on their health.

Bucky Fuller invented the cycle based on his belief that we have two energy tanks. The first is easy to replenish, whereas the second tank (A.K.A. second wind) is much harder to replenish. So Bucky began sleeping for 30 minutes every 6 hours. That’s 2 hours of sleep a day! He reported feeling, “the most vigorous and alert condition I have ever enjoyed.” Doctors examined him after several years of using the cycle and pronounced him perfectly healthy. In fact, Fuller only stopped the cycle because his colleagues were still stuck on monophasic cycles. This is by far the most extreme of the four, but also the most efficient.