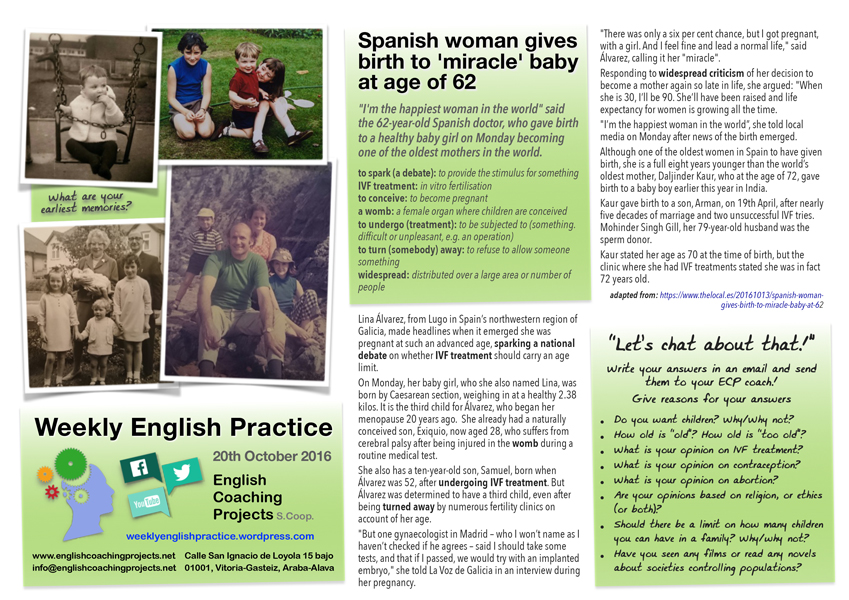 “I’m the happiest woman in the world” said the 62-year-old Spanish doctor, who gave birth to a healthy baby girl on Monday becoming one of the oldest mothers in the world.

to spark (a debate): to provide the stimulus for something

to conceive: to become pregnant

a womb: a female organ where children are conceived

to undergo (treatment): to be subjected to (something. difficult or unpleasant, e.g. an operation)

to turn (somebody) away: to refuse to allow someone something

widespread: distributed over a large area or number of people

Lina Álvarez, from Lugo in Spain’s northwestern region of Galicia, made headlines when it emerged she was pregnant at such an advanced age, sparking a national debate on whether IVF treatment should carry an age limit.

On Monday, her baby girl, who she also named Lina, was born by Caesarean section, weighing in at a healthy 2.38 kilos. It is the third child for Álvarez, who began her menopause 20 years ago.  She already had a naturally conceived son, Exiquio, now aged 28, who suffers from cerebral palsy after being injured in the womb during a routine medical test.

She also has a ten-year-old son, Samuel, born when Álvarez was 52, after undergoing IVF treatment. But Álvarez was determined to have a third child, even after being turned away by numerous fertility clinics on account of her age.

“But one gynaecologist in Madrid – who I won’t name as I haven’t checked if he agrees – said I should take some tests, and that if I passed, we would try with an implanted embryo,” she told La Voz de Galicia in an interview during her pregnancy.

“There was only a six per cent chance, but I got pregnant, with a girl. And I feel fine and lead a normal life,” said Álvarez, calling it her “miracle”.

Responding to widespread criticism of her decision to become a mother again so late in life, she argued: “When she is 30, I’ll be 90. She’ll have been raised and life expectancy for women is growing all the time.

“I’m the happiest woman in the world”, she told local media on Monday after news of the birth emerged.

Although one of the oldest women in Spain to have given birth, she is a full eight years younger than the world’s oldest mother, Daljinder Kaur, who at the age of 72, gave birth to a baby boy earlier this year in India.

Kaur stated her age as 70 at the time of birth, but the clinic where she had IVF treatments stated she was in fact 72 years old.