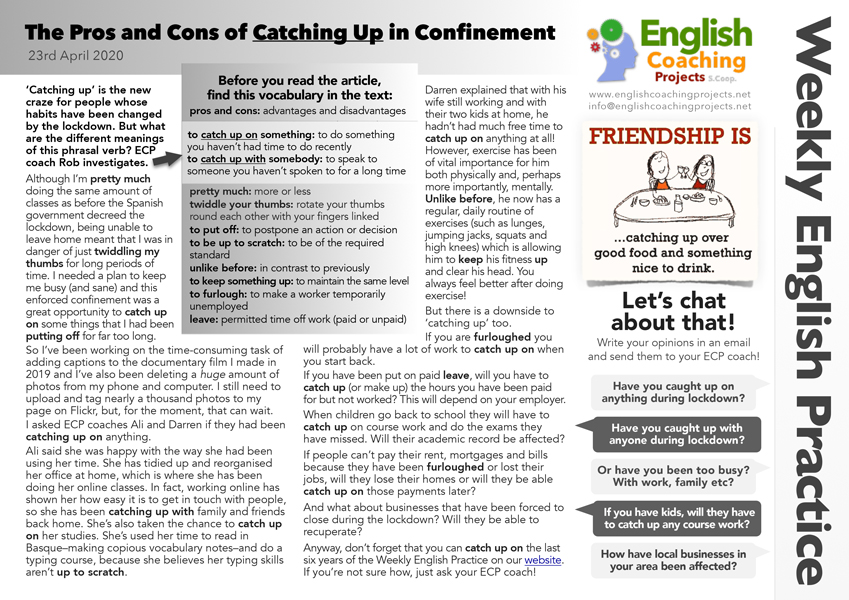 ‘Catching up’ is the new craze for people whose habits have been changed by the lockdown. But what are the different meanings of this phrasal verb? ECP coach Rob investigates.

pros and cons: advantages and disadvantages

to catch up on something: to do something you haven’t had time to do recently

to catch up with somebody: to speak to someone you haven’t spoken to for a long time

pretty much: more or less

to put off: to postpone an action or decision

to be up to scratch: to be of the required standard

unlike before: in contrast to previously

to keep something up: to maintain the same level

to furlough: to make a worker temporarily unemployed

‘Catching up’ is the new craze for people whose habits have been changed by the lockdown. But what are the different meanings of this phrasal verb? ECP coach Rob investigates.

Although I’m pretty much doing the same amount of classes as before the Spanish government decreed the lockdown, being unable to leave home meant that I was in danger of just twiddling my thumbs for long periods of time. I needed a plan to keep me busy (and sane) and this enforced confinement was a great opportunity to catch up on some things that I had been putting off for far too long.

So I’ve been working on the time-consuming task of adding captions to the documentary film I made in 2019 and I’ve also been deleting a huge amount of photos from my phone and computer. I still need to upload and tag nearly a thousand photos to my page on Flickr, but, for the moment, that can wait.

I asked ECP coaches Ali and Darren if they had been catching up on anything.

Ali said she was happy with the way she had been using her time. She has tidied up and reorganised her office at home, which is where she has been doing her online classes. In fact, working online has shown her how easy it is to get in touch with people, so she has been catching up with family and friends back home. She’s also taken the chance to catch up on her studies. She’s used her time to read in Basque–making copious vocabulary notes–and do a typing course, because she believes her typing skills aren’t up to scratch.

Darren explained that with his wife still working and with their two kids at home, he hadn’t had much free time to catch up on anything at all! However, exercise has been of vital importance for him both physically and, perhaps more importantly, mentally. Unlike before, he now has a regular, daily routine of exercises (such as lunges, jumping jacks, squats and high knees) which is allowing him to keep his fitness up and clear his head. You always feel better after doing exercise!

But there is a downside to ‘catching up’ too.

If you are furloughed you will probably have a lot of work to catch up on when you start back.

When children go back to school they will have to catch up on course work and do the exams they have missed. Will their academic record be affected?

If people can’t pay their rent, mortgages and bills because they have been furloughed or lost their jobs, will they lose their homes or will they be able catch up on those payments later?

And what about businesses that have been forced to close during the lockdown? Will they be able to recuperate?

Anyway, don’t forget that you can catch up on the last six years of the Weekly English Practice on our website. If you’re not sure how, just ask your ECP coach!