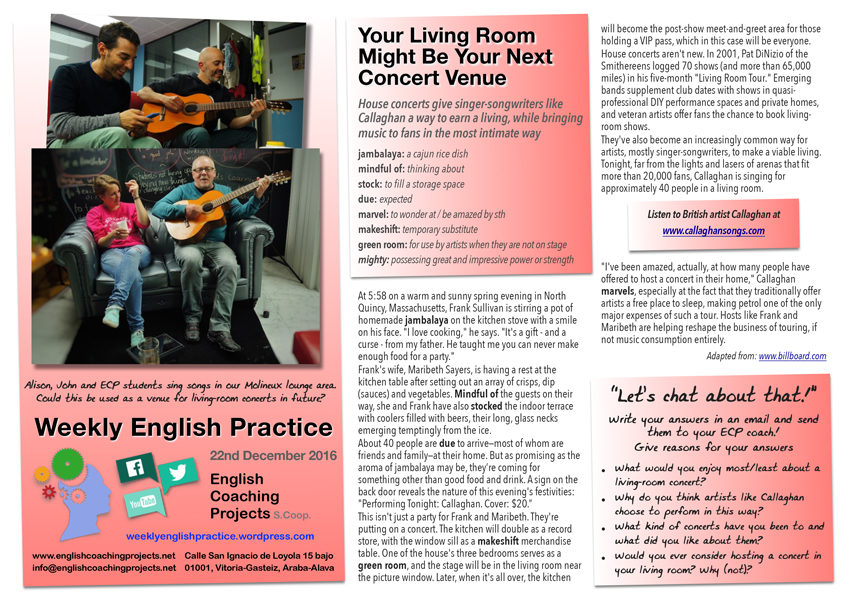 Your Living Room Might Be Your Next Concert Venue. House concerts give singer-songwriters like Callaghan a way to earn a living, while bringing music to fans in the most intimate way.

mindful of: thinking about

stock: to fill a storage space

marvel: to wonder at / be amazed by sth

green room: for use by artists when they are not on stage

At 5:58 on a warm and sunny spring evening in North Quincy, Massachusetts, Frank Sullivan is stirring a pot of homemade jambalaya on the kitchen stove with a smile on his face. “I love cooking,” he says. “It’s a gift – and a curse – from my father. He taught me you can never make enough food for a party.”

Frank’s wife, Maribeth Sayers, is having a rest at the kitchen table after setting out an array of crisps, dip (sauces) and vegetables. Mindful of the guests on their way, she and Frank have also stocked the indoor terrace with coolers filled with beers, their long, glass necks emerging temptingly from the ice.

About 40 people are due to arrive—most of whom are friends and family—at their home. But as promising as the aroma of jambalaya may be, they’re coming for something other than good food and drink. A sign on the back door reveals the nature of this evening’s festivities: “Performing Tonight: Callaghan. Cover: $20.”

This isn’t just a party for Frank and Maribeth. They’re putting on a concert. The kitchen will double as a record store, with the window sill as a makeshift merchandise table. One of the house’s three bedrooms serves as a green room, and the stage will be in the living room near the picture window. Later, when it’s all over, the kitchen will become the post-show meet-and-greet area for those holding a VIP pass, which in this case will be everyone.

They’ve also become an increasingly common way for artists, mostly singer-songwriters, to make a viable living. Tonight, far from the lights and lasers of arenas that fit more than 20,000 fans, Callaghan is singing for approximately 40 people in a living room.

“I’ve been amazed, actually, at how many people have offered to host a concert in their home,” Callaghan marvels, especially at the fact that they traditionally offer artists a free place to sleep, making petrol one of the only major expenses of such a tour. Hosts like Frank and Maribeth are helping reshape the business of touring, if not music consumption entirely.