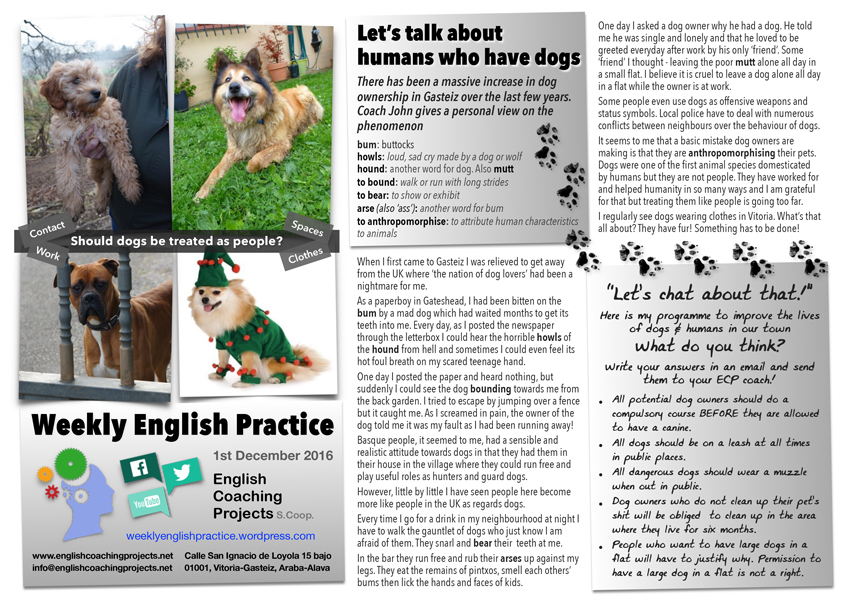 Let’s talk about humans who have dogs. There has been a massive increase in dog ownership in Gasteiz over the last few years. Coach John gives a personal view on the phenomenon.

howls: loud, sad cry made by a dog or wolf
hound: another word for dog. Also mutt

to bound: walk or run with long strides

to bear: to show or exhibit

to anthropomorphise: to attribute human characteristics to animals

When I first came to Gasteiz I was relieved to get away from the UK where ‘the nation of dog lovers’ had been a nightmare for me.

As a paperboy in Gateshead, I had been bitten on the bum by a mad dog which had waited months to get its teeth into me. Every day, as I posted the newspaper through the letterbox I could hear the horrible howls of the hound from hell and sometimes I could even feel its hot foul breath on my scared teenage hand.

One day I posted the paper and heard nothing, but suddenly I could see the dog bounding towards me from the back garden. I tried to escape by jumping over a fence but it caught me. As I screamed in pain, the owner of the dog told me it was my fault as I had been running away!

Basque people, it seemed to me, had a sensible and realistic attitude towards dogs in that they had them in their house in the village where they could run free and play useful roles as hunters and guard dogs.

However, little by little I have seen people here become more like people in the UK as regards dogs.

Every time I go for a drink in my neighbourhood at night I have to walk the gauntlet of dogs who just know I am afraid of them. They snarl and bear their  teeth at me.

In the bar they run free and rub their arses up against my legs. They eat the remains of pintxos, smell each others’ bums then lick the hands and faces of kids.

One day I asked a dog owner why he had a dog. He told me he was single and lonely and that he loved to be greeted everyday after work by his only ‘friend’. Some ‘friend’ I thought – leaving the poor mutt alone all day in a small flat. I believe it is cruel to leave a dog alone all day in a flat while the owner is at work.

Some people even use dogs as offensive weapons and status symbols. Local police have to deal with numerous conflicts between neighbours over the behaviour of dogs.

It seems to me that a basic mistake dog owners are making is that they are anthropomorphising their pets. Dogs were one of the first animal species domesticated by humans but they are not people. They have worked for and helped humanity in so many ways and I am grateful for that but treating them like people is going too far.

I regularly see dogs wearing clothes in Vitoria. What’s that all about? They have fur! Something has to be done!

What do you think?