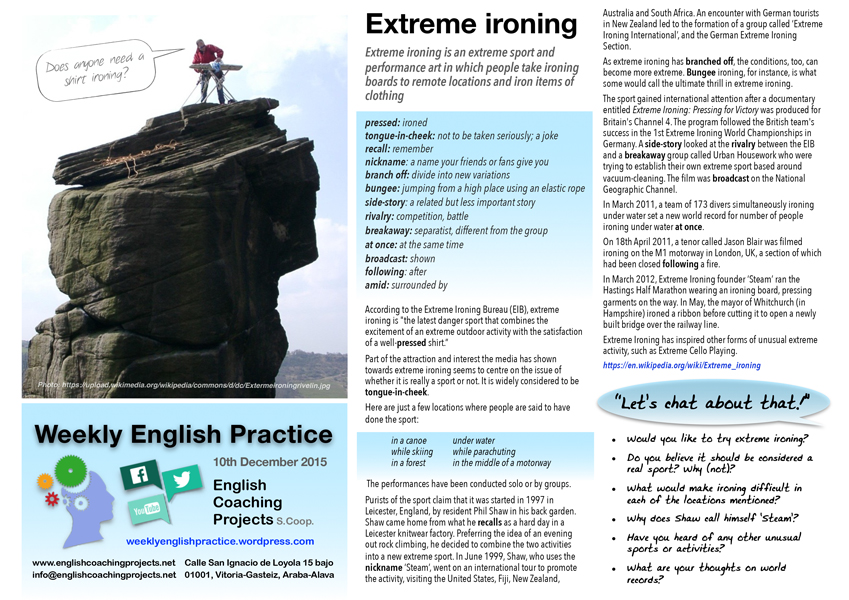 tongue-in-cheek: not to be taken seriously; a joke

nickname: a name your friends or fans give you

branch off: divide into new variations

bungee: jumping from a high place using an elastic rope

breakaway: separatist, different from the group

at once: at the same time

According to the Extreme Ironing Bureau (EIB), extreme ironing is “the latest danger sport that combines the excitement of an extreme outdoor activity with the satisfaction of a well-pressed shirt.”

Part of the attraction and interest the media has shown towards extreme ironing seems to centre on the issue of whether it is really a sport or not. It is widely considered to be tongue-in-cheek.

Here are just a few locations where people are said to have done the sport:

while skiing         while parachuting

The performances have been conducted solo or by groups.

Purists of the sport claim that it was started in 1997 in Leicester, England, by resident Phil Shaw in his back garden. Shaw came home from what he recalls as a hard day in a Leicester knitwear factory. Preferring the idea of an evening out rock climbing, he decided to combine the two activities into a new extreme sport. In June 1999, Shaw, who uses the nickname ‘Steam’, went on an international tour to promote the activity, visiting the United States, Fiji, New Zealand, Australia and South Africa. An encounter with German tourists in New Zealand led to the formation of a group called ‘Extreme Ironing International’, and the German Extreme Ironing Section.

As extreme ironing has branched off, the conditions, too, can become more extreme. Bungee ironing, for instance, is what some would call the ultimate thrill in extreme ironing.

The sport gained international attention after a documentary entitled Extreme Ironing: Pressing for Victory was produced for Britain’s Channel 4. The program followed the British team’s success in the 1st Extreme Ironing World Championships in Germany. A side-story looked at the rivalry between the EIB and a breakaway group called Urban Housework who were trying to establish their own extreme sport based around vacuum-cleaning. The film was broadcast on the National Geographic Channel.

On 18th April 2011, a tenor called Jason Blair was filmed ironing on the M1 motorway in London, UK, a section of which had been closed following a fire.

In March 2012, Extreme Ironing founder ‘Steam’ ran the Hastings Half Marathon wearing an ironing board, pressing garments on the way. In May, the mayor of Whitchurch (in Hampshire) ironed a ribbon before cutting it to open a newly built bridge over the railway line.

Extreme Ironing has inspired other forms of unusual extreme activity, such as Extreme Cello Playing.