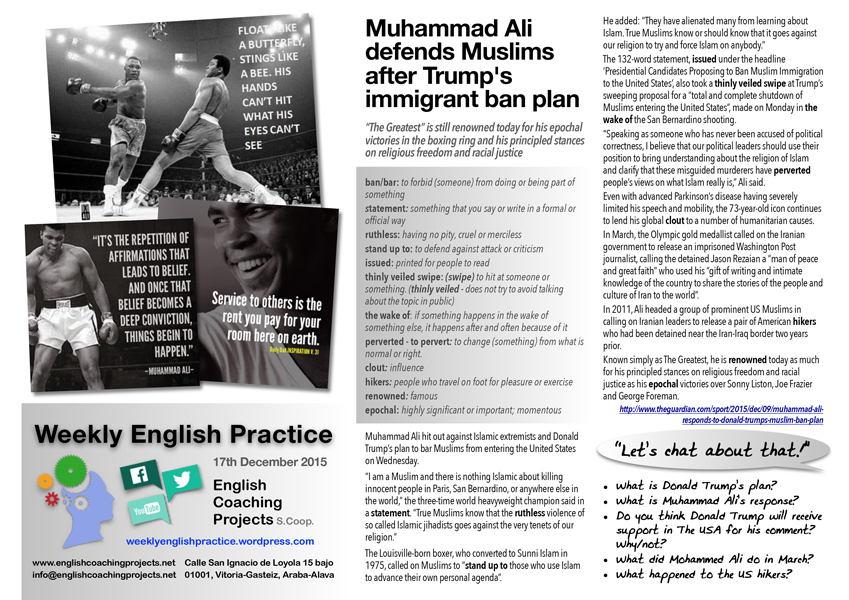 ban/bar: to forbid (someone) from doing or being part of something

statement: something that you say or write in a formal or official way

ruthless: having no pity, cruel or merciless

stand up to: to defend against attack or criticism

issued: printed for people to read

thinly veiled swipe: (swipe) to hit at someone or something. (thinly veiled – does not try to avoid talking about the topic in public)

perverted – to pervert: to change (something) from what is normal or right.

hikers: people who travel on foot for pleasure or exercise

Muhammad Ali hit out against Islamic extremists and Donald Trump’s plan to bar Muslims from entering the United States on Wednesday.

“I am a Muslim and there is nothing Islamic about killing innocent people in Paris, San Bernardino, or anywhere else in the world,” the three-time world heavyweight champion said in a statement. “True Muslims know that the ruthless violence of so called Islamic jihadists goes against the very tenets of our religion.”

The Louisville-born boxer, who converted to Sunni Islam in 1975, called on Muslims to “stand up to those who use Islam to advance their own personal agenda”.

He added: “They have alienated many from learning about Islam. True Muslims know or should know that it goes against our religion to try and force Islam on anybody.”

The 132-word statement, issued under the headline ‘Presidential Candidates Proposing to Ban Muslim Immigration to the United States’, also took a thinly veiled swipe at Trump’s sweeping proposal for a “total and complete shutdown of Muslims entering the United States”, made on Monday in the wake of the San Bernardino shooting.

“Speaking as someone who has never been accused of political correctness, I believe that our political leaders should use their position to bring understanding about the religion of Islam and clarify that these misguided murderers have perverted people’s views on what Islam really is,” Ali said.

Even with advanced Parkinson’s disease having severely limited his speech and mobility, the 73-year-old icon continues to lend his global clout to a number of humanitarian causes.

In March, the Olympic gold medallist called on the Iranian government to release an imprisoned Washington Post journalist, calling the detained Jason Rezaian a “man of peace and great faith” who used his “gift of writing and intimate knowledge of the country to share the stories of the people and culture of Iran to the world”.

In 2011, Ali headed a group of prominent US Muslims in calling on Iranian leaders to release a pair of American hikers who had been detained near the Iran-Iraq border two years prior.

Known simply as The Greatest, he is renowned today as much for his principled stances on religious freedom and racial justice as his epochal victories over Sonny Liston, Joe Frazier and George Foreman.