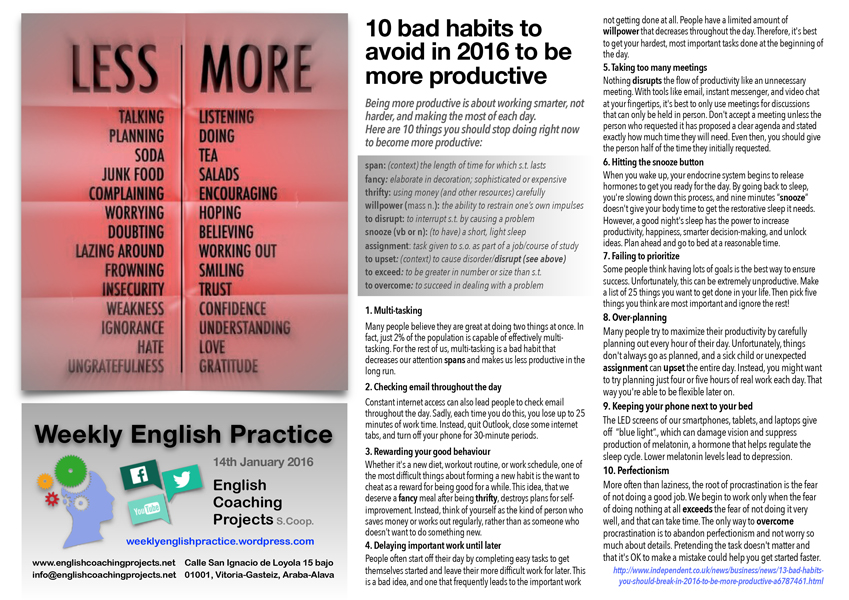 Being more productive is about working smarter, not harder, and making the most of each day.
Here are 10 things you should stop doing right now to become more productive.

span: (context) the length of time for which s.t. lasts

willpower (mass n.): the ability to restrain one’s own impulses

to disrupt: to interrupt s.t. by causing a problem

assignment: task given to s.o. as part of a job/course of study

to upset: (context) to cause disorder/disrupt (see above)

to exceed: to be greater in number or size than s.t.

to overcome: to succeed in dealing with a problem

Many people believe they are great at doing two things at once. In fact, just 2% of the population is capable of effectively multi-tasking. For the rest of us, multi-tasking is a bad habit that decreases our attention spans and makes us less productive in the long run.

2. Checking email throughout the day

Constant internet access can also lead people to check email throughout the day. Sadly, each time you do this, you lose up to 25 minutes of work time. Instead, quit Outlook, close some internet tabs, and turn off your phone for 30-minute periods.

Whether it’s a new diet, workout routine, or work schedule, one of the most difficult things about forming a new habit is the want to cheat as a reward for being good for a while. This idea, that we deserve a fancy meal after being thrifty, destroys plans for self-improvement. Instead, think of yourself as the kind of person who saves money or works out regularly, rather than as someone who doesn’t want to do something new.

People often start off their day by completing easy tasks to get themselves started and leave their more difficult work for later. This is a bad idea, and one that frequently leads to the important work not getting done at all. People have a limited amount of willpower that decreases throughout the day. Therefore, it’s best to get your hardest, most important tasks done at the beginning of the day.

5. Taking too many meetings

Nothing disrupts the flow of productivity like an unnecessary meeting. With tools like email, instant messenger, and video chat at your fingertips, it’s best to only use meetings for discussions that can only be held in person. Don’t accept a meeting unless the person who requested it has proposed a clear agenda and stated exactly how much time they will need. Even then, you should give the person half of the time they initially requested.

When you wake up, your endocrine system begins to release hormones to get you ready for the day. By going back to sleep, you’re slowing down this process, and nine minutes “snooze” doesn’t give your body time to get the restorative sleep it needs. However, a good night’s sleep has the power to increase productivity, happiness, smarter decision-making, and unlock  ideas. Plan ahead and go to bed at a reasonable time.

Some people think having lots of goals is the best way to ensure success. Unfortunately, this can be extremely unproductive. Make a list of 25 things you want to get done in your life. Then pick five things you think are most important and ignore the rest!

Many people try to maximize their productivity by carefully planning out every hour of their day. Unfortunately, things don’t always go as planned, and a sick child or unexpected assignment can upset the entire day. Instead, you might want to try planning just four or five hours of real work each day. That way you’re able to be flexible later on.

9. Keeping your phone next to your bed

The LED screens of our smartphones, tablets, and laptops give off  “blue light”., which can damage vision and suppress production of melatonin, a hormone that helps regulate the sleep cycle. Lower melatonin levels lead to depression.

More often than laziness, the root of procrastination is the fear of not doing a good job. We begin to work only when the fear of doing nothing at all exceeds the fear of not doing it very well, and that can take time. The only way to overcome procrastination is to abandon perfectionism and not worry so much about details. Pretending the task doesn’t matter and that it’s OK to make a mistake could help you get started faster.