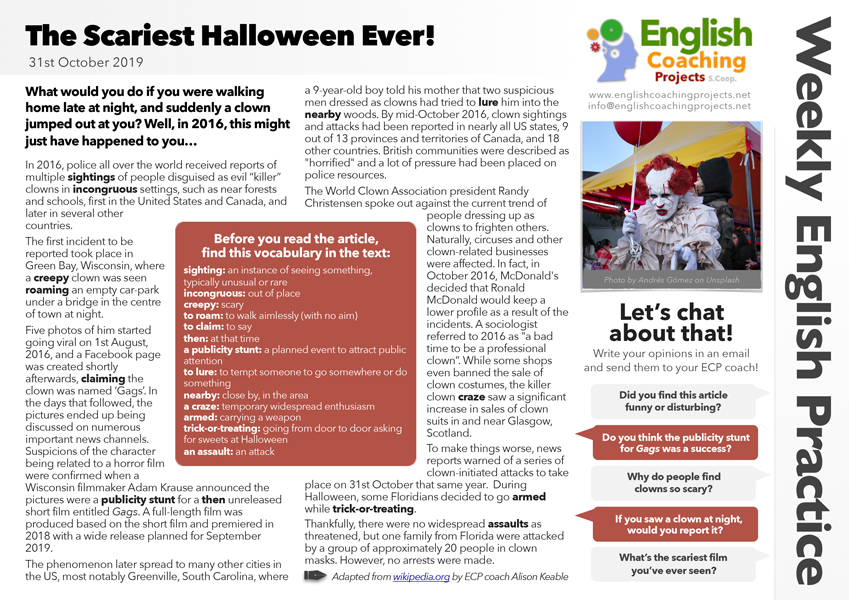 In 2016, the sighting of a killer clown began a craze that made it the scariest Halloween ever.

What would you do if you were walking home late at night, and suddenly a clown jumped out at you? Well, in 2016, this might just have happened to you…

sighting: an instance of seeing something, typically unusual or rare

incongruous: out of place

to roam: to walk aimlessly (with no aim)

to claim: to say

then: at that time

a publicity stunt: a planned event to attract public attention

to lure: to tempt someone to go somewhere or do something

nearby: close by, in the area

trick-or-treating: going from door to door asking for sweets at Halloween

an assault: an attack

In 2016, police all over the world received reports of multiple sightings of people disguised as evil “killer” clowns in incongruous settings, such as near forests and schools, first in the United States and Canada, and later in several other countries.

The first incident to be reported took place in Green Bay, Wisconsin, where a creepy clown was seen roaming an empty car-park under a bridge in the centre of town at night.

Five photos of him started going viral on 1st August, 2016, and a Facebook page was created shortly afterwards, claiming the clown was named ‘Gags’. In the days that followed, the pictures ended up being discussed on numerous important news channels. Suspicions of the character being related to a horror film were confirmed when a Wisconsin filmmaker Adam Krause announced the pictures were a publicity stunt for a then unreleased short film entitled Gags. A full-length film was produced based on the short film and premiered in 2018 with a wide release planned for September 2019.

The phenomenon later spread to many other cities in the US, most notably Greenville, South Carolina, where a 9-year-old boy told his mother that two suspicious men dressed as clowns had tried to lure him into the nearby woods. By mid-October 2016, clown sightings and attacks had been reported in nearly all US states, 9 out of 13 provinces and territories of Canada, and 18 other countries. British communities were described as “horrified” and a lot of pressure had been placed on police resources.

The World Clown Association president Randy Christensen spoke out against the current trend of people dressing up as clowns to frighten others. Naturally, circuses and other clown-related businesses were affected. In fact, in October 2016, McDonald’s decided that Ronald McDonald would keep a lower profile as a result of the incidents. A sociologist referred to 2016 as “a bad time to be a professional clown”. While some shops even banned the sale of clown costumes, the killer clown craze saw a significant increase in sales of clown suits in and near Glasgow, Scotland.

To make things worse, news reports warned of a series of clown-initiated attacks to take place on 31st October that same year.  During Halloween, some Floridians decided to go armed while trick-or-treating.

Thankfully, there were no widespread assaults as threatened, but one family from Florida were attacked by a group of approximately 20 people in clown masks. However, no arrests were made.