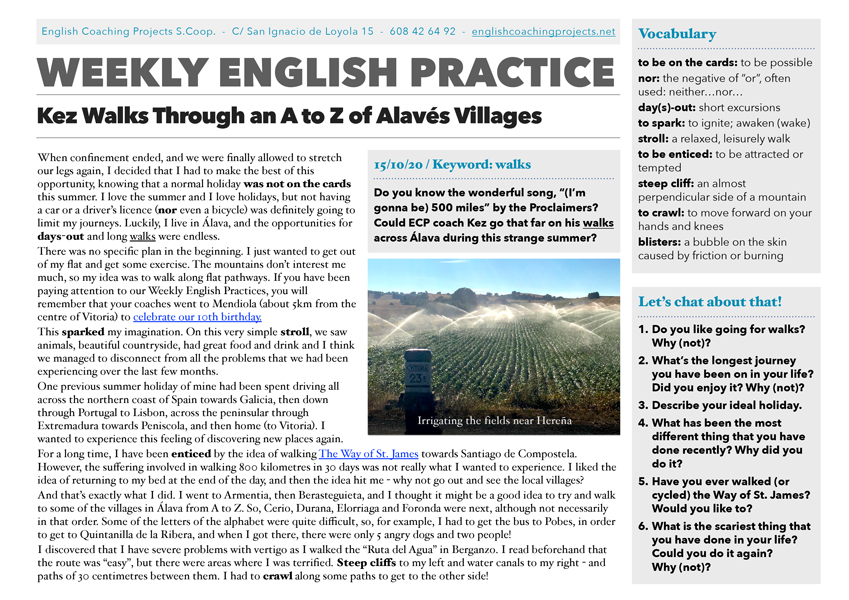 Kez Walks Through an A to Z of Álava’s Villages

Do you know the wonderful song, “(I’m gonna be) 500 miles” by the Proclaimers? Could ECP coach Kez go that far on his walks across Álava during this strange summer?

to be on the cards: to be possible

nor: the negative of “or”, often used: neither…nor…

to spark: to ignite; awaken (wake)

to be enticed: to be attracted or tempted

steep cliff: an almost perpendicular side of a mountain

to crawl: to move forward on your hands and knees

blisters: a bubble on the skin caused by friction or burning

Do you know the wonderful song, “(I’m gonna be) 500 miles” by the Proclaimers? Could ECP coach Kez go that far on his walks across Álava during this strange summer?

When confinement ended, and we were finally allowed to stretch our legs again, I decided that I had to make the best of this opportunity, knowing that a normal holiday was not on the cards this summer. I love the summer and I love holidays, but not having a car or a driver’s licence (nor even a bicycle) was definitely going to limit my journeys. Luckily, I live in Álava, and the opportunities for days-out and long walks were endless.

There was no specific plan in the beginning. I just wanted to get out of my flat and get some exercise. The mountains don’t interest me much, so my idea was to walk along flat pathways. If you have been paying attention to our Weekly English Practices, you will remember that your coaches went to Mendiola (about 5km from the centre of Vitoria) to celebrate our 10th birthday.

This sparked my imagination. On this very simple stroll, we saw animals, beautiful countryside, had great food and drink and I think we managed to disconnect from all the problems that we had been experiencing over the last few months.

One previous summer holiday of mine had been spent driving all across the northern coast of Spain towards Galicia, then down through Portugal to Lisbon, across the peninsular through Extremadura towards Peniscola, and then home (to Vitoria). I wanted to experience this feeling of discovering new places again.

For a long time, I have been enticed by the idea of walking The Way of St. James towards Santiago de Compostela. However, the suffering involved in walking 800 kilometres in 30 days was not really what I wanted to experience. I liked the idea of returning to my bed at the end of the day, and then the idea hit me – why not go out and see the local villages?

And that’s exactly what I did. I went to Armentia, then Berasteguieta, and I thought it might be a good idea to try and walk to some of the villages in Álava from A to Z. So, Cerio, Durana, Elorriaga and Foronda were next, although not necessarily in that order. Some of the letters of the alphabet were quite difficult, so, for example, I had to get the bus to Pobes, in order to get to Quintanilla de la Ribera, and when I got there, there were only 5 angry dogs and two people!

I discovered that I have severe problems with vertigo as I walked the “Ruta del Agua” in Berganzo. I read beforehand that the route was “easy”, but there were areas where I was terrified. Steep cliffs to my left and water canals to my right – and paths of 30 centimetres between them. I had to crawl along some paths to get to the other side!
So, in total, I think that I have walked about 600km this summer (not quite as far as the 500 miles (800km) in the famous song). I got a couple of blisters but I managed to avoid any major problems with my health and fitness.

The biggest problem was the weather. Some days were incredibly hot, and although I wanted to go and walk some more, it wouldn’t have been the best idea. There is a famous English saying that “Mad dogs and Englishmen go out in the midday sun”. For once, I decided to be neither a mad dog nor an Englishman!!

It has been a very different summer, but for me, it has been very easy to get out and enjoy life! I hope it has been the same for you!

Take a moment to look at these related articles

Edurne Pasaban: Two Lifetimes in One