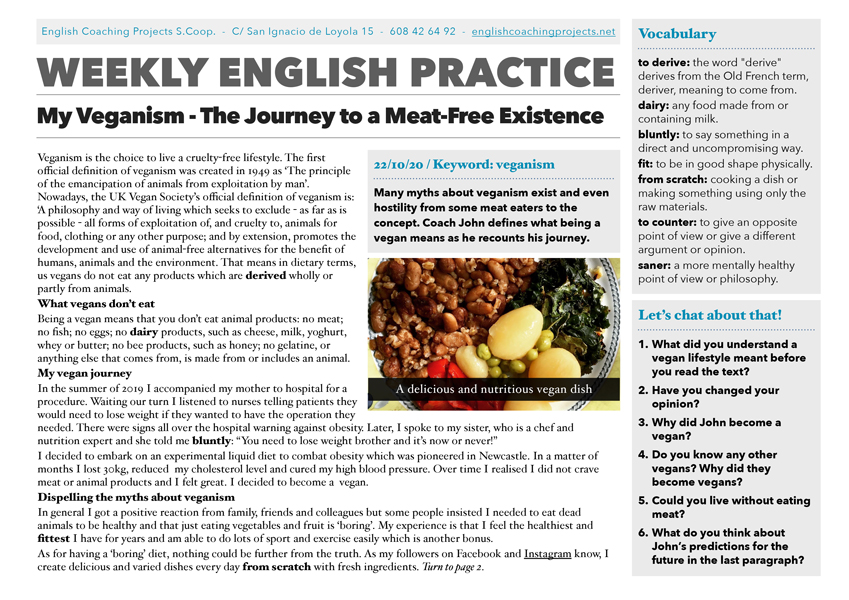 My Veganism – The Journey to a Meat-Free Existence

Many myths about veganism exist and even hostility from some meat eaters to the concept. Coach John defines what being a vegan means as he recounts his journey.

to derive: the word “derive” derives from the Old French term, deriver, meaning to come from.

dairy: any food made from or containing milk.

bluntly: to say something in a direct and uncompromising way.

fit: to be in good shape physically.

from scratch: cooking a dish or making something using only the raw materials.

to counter: to give an opposite point of view or give a different argument or opinion.

saner: a more mentally healthy point of view or philosophy.

Many myths about veganism exist and even hostility from some meat eaters to the concept. Coach John defines what being a vegan means as he recounts his journey.

Veganism is the choice to live a cruelty-free lifestyle. The first official definition of veganism was created in 1949 as ‘The principle of the emancipation of animals from exploitation by man’. Nowadays, the UK Vegan Society’s official definition of veganism is: ‘A philosophy and way of living which seeks to exclude – as far as is possible – all forms of exploitation of, and cruelty to, animals for food, clothing or any other purpose; and by extension, promotes the development and use of animal-free alternatives for the benefit of humans, animals and the environment. That means in dietary terms, us vegans do not eat any products which are derived wholly or partly from animals.

Being a vegan means that you don’t eat animal products: no meat; no fish; no eggs; no dairy products, such as cheese, milk, yoghurt, whey or butter; no bee products, such as honey; no gelatine, or anything else that comes from, is made from or includes an animal.

In the summer of 2019 I accompanied my mother to hospital for a procedure. Waiting our turn I listened to nurses telling patients they would need to lose weight if they wanted to have the operation they needed. There were signs all over the hospital warning against obesity. Later, I spoke to my sister, who is a chef and nutrition expert and she told me bluntly: “You need to lose weight brother and it’s now or never!”

I decided to embark on an experimental liquid diet to combat obesity which was pioneered in Newcastle. In a matter of months I lost 30kg, reduced  my cholesterol level and cured my high blood pressure. Over time I realised I did not crave meat or animal products and I felt great. I decided to become a  vegan.

Dispelling the myths about Veganism

In general I got a positive reaction from family, friends and colleagues but some people insisted I needed to eat dead animals to be healthy and that just eating vegetables and fruit is ‘boring’. My experience is that I feel the healthiest and fittest I have for years and am able to do lots of sport and exercise easily which is another bonus.

As for having a ‘boring’ diet, nothing could be further from the truth. As my followers on Facebook and Instagram know, I create delicious and varied dishes everyday from scratch with fresh ingredients.

I’ve met some interesting people on my vegan journey. One friend gave me nutritional advice and emotional support and countered the negativity I faced from some with invaluable positivity. Visiting vegan restaurants and having a vegan picnic makes you feel part of a team. Sharing your veganism and simple celebrations of it make it real.

In a future, saner and more ethical society I doubt humans will eat the other beings we share the planet with, for many reasons.

I look forward to the time when eating animals will seem as grotesque and inhumane as slavery, racism, sexism, homophobia, economic injustice and all forms of exploitation.