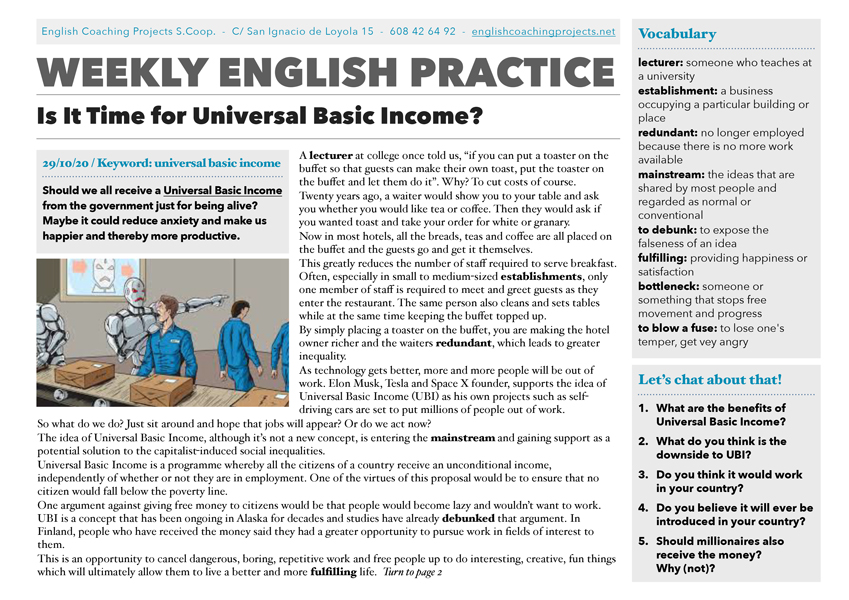 Is It Time for Universal Basic Income?

Should we all receive a Universal Basic Income from the government just for being alive? Maybe it could reduce anxiety and make us happier and thereby more productive.

lecturer: someone who teaches at a university

establishment: a business occupying a particular building or place

redundant: no longer employed because there is no more work available

mainstream: the ideas that are shared by most people and regarded as normal or conventional

to debunk: to expose the falseness of an idea

bottleneck: someone or something that stops free movement and progress

to blow a fuse: to lose one’s temper, get vey angry

Should we all receive a Universal Basic Income from the government just for being alive? Maybe it could reduce anxiety and make us happier and thereby more productive.

Twenty years ago, a waiter would show you to your table and ask you whether you would like tea or coffee. Then they would ask if you wanted toast and take your order for white or granary.

Now in most hotels, all the breads, teas and coffee are all placed on the buffet and the guests go and get it themselves.

This greatly reduces the number of staff required to serve breakfast. Often, especially in small to medium-sized establishments, only one member of staff is required to meet and greet guests as they enter the restaurant. The same person also cleans and sets tables while at the same time keeping the buffet topped up.

By simply placing a toaster on the buffet, you are making the hotel owner richer and the waiters redundant, which leads to greater inequality.

As technology gets better, more and more people will be out of work. Elon Musk, Tesla and Space X founder, supports the idea of Universal Basic Income (UBI) as his own projects such as self-driving cars are set to put millions of people out of work.

So what do we do? Just sit around and hope that jobs will appear? Or do we act now?

The idea of Universal Basic Income, although it’s not a new concept, is entering the mainstream and gaining support as a potential solution to the capitalist-induced social inequalities.

Universal Basic Income is a programme whereby all the citizens of a country receive an unconditional income, independently of whether or not they are in employment. One of the virtues of this proposal would be to ensure that no citizen would fall below the poverty line.

One argument against giving free money to citizens would be that people would become lazy and wouldn’t want to work. UBI is a concept that has been ongoing in Alaska for decades and studies have already debunked that argument. In Finland, people who have received the money said they had a greater opportunity to pursue work in fields of interest to them.

This is an opportunity to cancel dangerous, boring, repetitive work and free people up to do interesting, creative, fun things which will ultimately allow them to live a better and more fulfilling life. Turn to page 2

Of course, if we have a hangover from Calvinism, we are going to be heading for a painful bottleneck that we have to pass through before any positive change is made.

For this idea to work, people would have to be more supportive in their attitude to the less privileged. Whether they are in a position to work or not, we should wish them the best and enjoy seeing people living a decent life free of suffering.

Surely the billionaires of this world will come to the realisation that there is a level of inequality that becomes unsustainable and that the masses will finally blow a fuse and come looking for them with pitchforks. Redistribution is surely the endgame.

People over 40 should only work 3 days a week