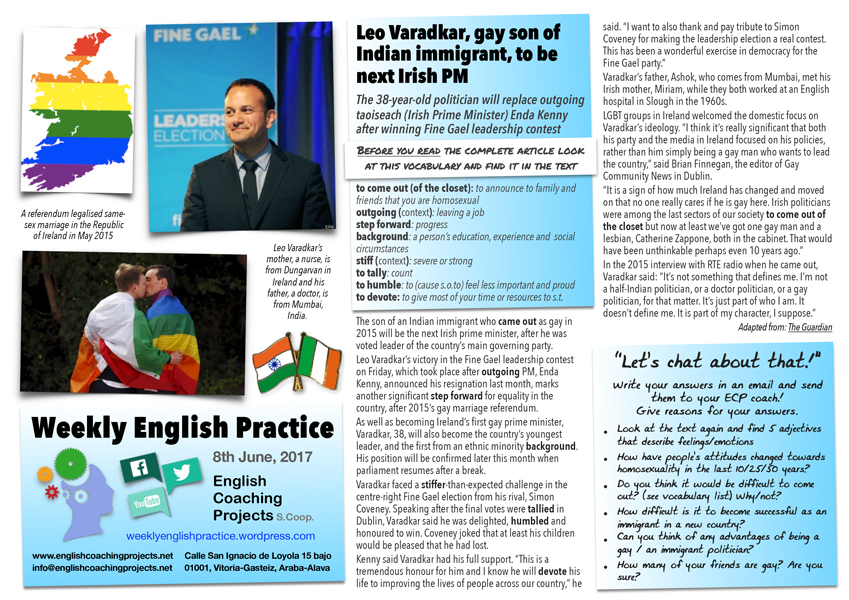 to come out (of the closet): to announce to family and friends that you are homosexual

to humble: to (cause s.o.to) feel less important and proud

to devote: to give most of your time or resources to s.t.

The son of an Indian immigrant who came out as gay in 2015 will be the next Irish prime minister, after he was voted leader of the country’s main governing party.

As well as becoming Ireland’s first gay prime minister, Varadkar, 38, will also become the country’s youngest leader, and the first from an ethnic minority background. His position will be confirmed later this month when parliament resumes after a break.

Varadkar faced a stiffer-than-expected challenge in the centre-right Fine Gael election from his rival, Simon Coveney. Speaking after the final votes were tallied in Dublin, Varadkar said he was delighted, humbled and honoured to win. Coveney joked that at least his children would be pleased that he had lost.

Kenny said Varadkar had his full support. “This is a tremendous honour for him and I know he will devote his life to improving the lives of people across our country,” he said. “I want to also thank and pay tribute to Simon Coveney for making the leadership election a real contest. This has been a wonderful exercise in democracy for the Fine Gael party.”

Varadkar’s father, Ashok, who comes from Mumbai, met his Irish mother, Miriam, while they both worked at an English hospital in Slough in the 1960s.

LGBT groups in Ireland welcomed the domestic focus on Varadkar’s ideology. “I think it’s really significant that both his party and the media in Ireland focused on his policies, rather than him simply being a gay man who wants to lead the country,” said Brian Finnegan, the editor of Gay Community News in Dublin.

“It is a sign of how much Ireland has changed and moved on that no one really cares if he is gay here. Irish politicians were among the last sectors of our society to come out of the closet but now at least we’ve got one gay man and a lesbian, Catherine Zappone, both in the cabinet. That would have been unthinkable perhaps even 10 years ago.”

In the 2015 interview with RTE radio when he came out, Varadkar said: “It’s not something that defines me. I’m not a half-Indian politician, or a doctor politician, or a gay politician, for that matter. It’s just part of who I am. It doesn’t define me. It is part of my character, I suppose.”

Adapted from: The Guardian