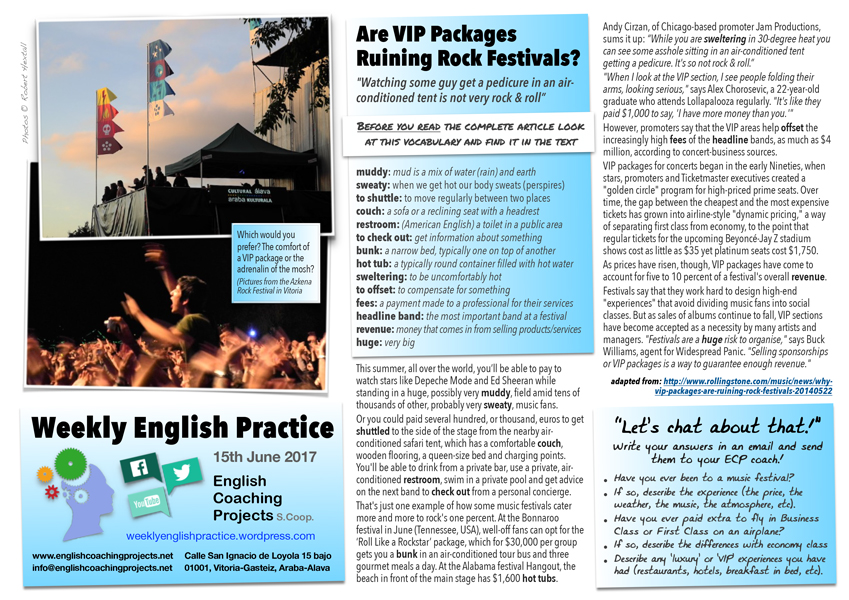 muddy: mud is a mix of water (rain) and earth

sweaty: when we get hot our body sweats (perspires)

to shuttle: to move regularly between two places

couch: a sofa or a reclining seat with a headrest

restroom: (American English) a toilet in a public area

to check out: get information about something

bunk: a narrow bed, typically one on top of another

hot tub: a typically round container filled with hot water

sweltering: to be uncomfortably hot

to offset: to compensate for something

fees: a payment made to a professional for their services

headline band: the most important band at a festival

revenue: money that comes in from selling products/services

This summer, all over the world, you’ll be able to pay to watch stars like Depeche Mode and Ed Sheeran while standing in a huge, possibly very muddy, field amid tens of thousands of other, probably very sweaty, music fans.

Or you could paid several hundred, or thousand, euros to get shuttled to the side of the stage from the nearby air-conditioned safari tent, which has a comfortable couch, wooden flooring, a queen-size bed and charging points. You’ll be able to drink from a private bar, use a private, air-conditioned restroom, swim in a private pool and get advice on the next band to check out from a personal concierge.

That’s just one example of how some music festivals cater more and more to rock’s one percent. At the Bonnaroo festival in June (Tennessee, USA), well-off fans can opt for the ‘Roll Like a Rockstar’ package, which for $30,000 per group gets you a bunk in an air-conditioned tour bus and three gourmet meals a day. At the Alabama festival Hangout, the beach in front of the main stage has $1,600 hot tubs.

Andy Cirzan, of Chicago-based promoter Jam Productions, sums it up: “While you are sweltering in 30-degree heat you can see some asshole sitting in an air-conditioned tent getting a pedicure. It’s so not rock & roll.”

“When I look at the VIP section, I see people folding their arms, looking serious,” says Alex Chorosevic, a 22-year-old graduate who attends Lollapalooza regularly. “It’s like they paid $1,000 to say, ‘I have more money than you.'”

However, promoters say that the VIP areas help offset the increasingly high fees of the headline bands, as much as $4 million, according to concert-business sources.

VIP packages for concerts began in the early Nineties, when stars, promoters and Ticketmaster executives created a “golden circle” program for high-priced prime seats. Over time, the gap between the cheapest and the most expensive tickets has grown into airline-style “dynamic pricing,” a way of separating first class from economy, to the point that regular tickets for the upcoming Beyoncé-Jay Z stadium shows cost as little as $35 yet platinum seats cost $1,750.

As prices have risen, though, VIP packages have come to account for five to 10 percent of a festival’s overall revenue.

Festivals say that they work hard to design high-end “experiences” that avoid dividing music fans into social classes. But as sales of albums continue to fall, VIP sections have become accepted as a necessity by many artists and managers. “Festivals are a huge risk to organise,” says Buck Williams, agent for Widespread Panic. “Selling sponsorships or VIP packages is a way to guarantee enough revenue.”