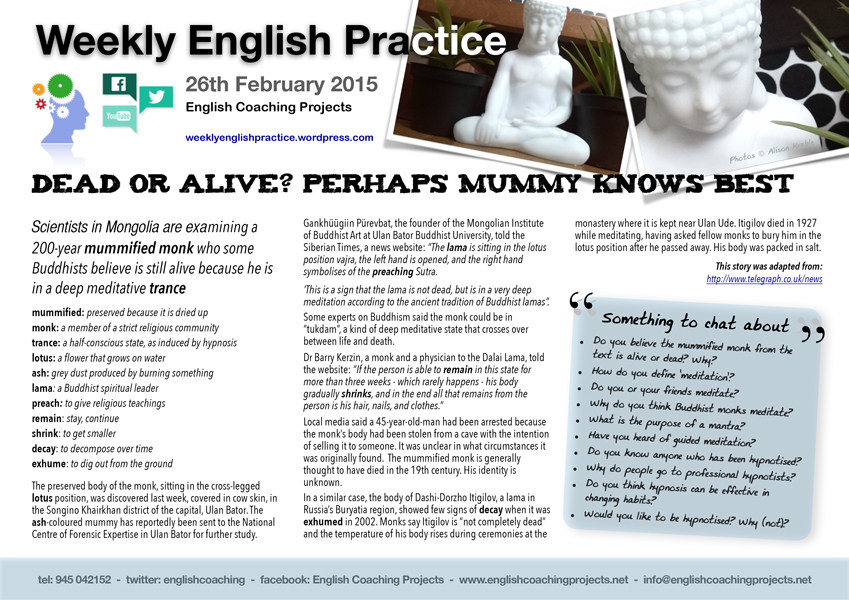 mummified: preserved because it is dried up

monk: a member of a strict religious community

trance: a half-conscious state, as induced by hypnosis

lotus: a flower that grows on water

preach: to give religious teachings

shrink: to get smaller

decay: to decompose over time

exhume: to dig out from the ground

The preserved body of the monk, sitting in the cross-legged lotus position, was discovered last week, covered in cow skin, in the Songino Khairkhan district of the capital, Ulan Bator. The ash-coloured mummy has reportedly been sent to the National Centre of Forensic Expertise in Ulan Bator for further study.

Gankhüügiin Pürevbat, the founder of the Mongolian Institute of Buddhist Art at Ulan Bator Buddhist University, told the Siberian Times, a news website: “The lama is sitting in the lotus position vajra, the left hand is opened, and the right hand symbolises of the preaching Sutra.

‘This is a sign that the lama is not dead, but is in a very deep meditation according to the ancient tradition of Buddhist lamas”.

Some experts on Buddhism said the monk could be in “tukdam”, a kind of deep meditative state that crosses over between life and death.

Dr Barry Kerzin, a monk and a physician to the Dalai Lama, told the website: “If the person is able to remain in this state for more than three weeks – which rarely happens – his body gradually shrinks, and in the end all that remains from the person is his hair, nails, and clothes.”

Local media said a 45-year-old-man had been arrested because the monk’s body had been stolen from a cave with the intention of selling it to someone. It was unclear in what circumstances it was originally found.  The mummified monk is generally thought to have died in the 19th century. His identity is unknown.

In a similar case, the body of Dashi-Dorzho Itigilov, a lama in Russia’s Buryatia region, showed few signs of decay when it was exhumed in 2002. Monks say Itigilov is “not completely dead” and the temperature of his body rises during ceremonies at the monastery where it is kept near Ulan Ude. Itigilov died in 1927 while meditating, having asked fellow monks to bury him in the lotus position after he passed away. His body was packed in salt.

This story was adapted from: http://www.telegraph.co.uk/news