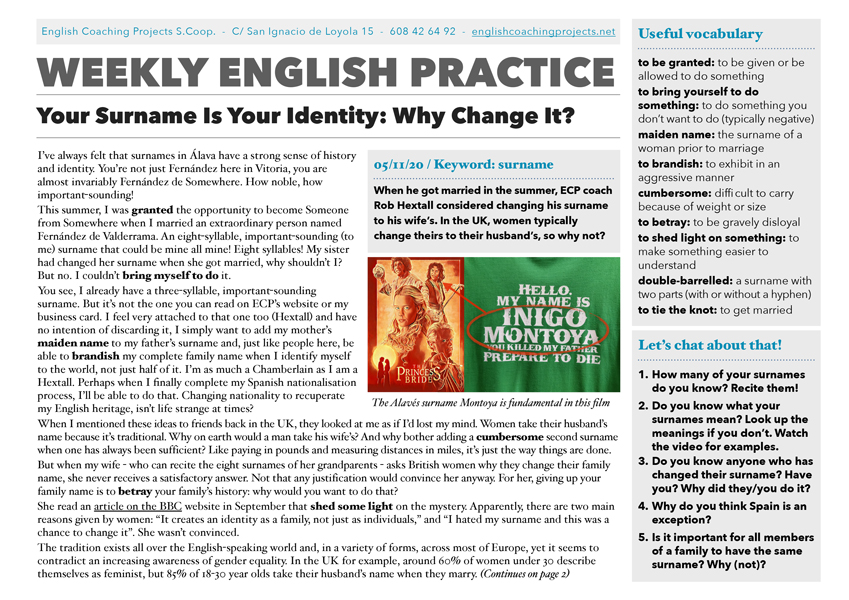 Your Surname Is Your Identity: Why Change It?

When he got married in the summer, ECP coach Rob Hextall considered changing his surname to his wife’s. In the UK, women typically change theirs to their husband’s, so why not?

to be granted: to be given or be allowed to do something

maiden name: the surname of a woman prior to marriage

to brandish: to exhibit in an aggressive manner

cumbersome: difficult to carry because of weight or size

to betray: to be gravely disloyal

to shed light on something: to make something easier to understand

double-barrelled: a surname with two parts (with or without a hyphen)

to tie the knot: to get married

When he got married in the summer, ECP coach Rob Hextall considered changing his surname to his wife’s. In the UK, women typically change theirs to their husband’s, so why not?

I’ve always felt that surnames in Álava have a strong sense of history and identity. You’re not just Fernández here in Vitoria, you are almost invariably Fernández de Somewhere. How noble, how important-sounding!

This summer, I was granted the opportunity to become Someone from Somewhere when I married an extraordinary person named Fernández de Valderrama. An eight-syllable, important-sounding (to me) surname that could be mine all mine! Eight syllables! My sister had changed her surname when she got married, why shouldn’t I? But no. I couldn’t bring myself to do it.

You see, I already have a three-syllable, important-sounding surname. But it’s not the one you can read on ECP’s website or my business card. I feel very attached to that one too (Hextall) and have no intention of discarding it, I simply want to add my mother’s maiden name to my father’s surname and, just like people here, be able to brandish my complete family name when I identify myself to the world, not just half of it. I’m as much a Chamberlain as I am a Hextall. Perhaps when I finally complete my Spanish nationalisation process, I’ll be able to do that. Changing nationality to recuperate my English heritage, isn’t life strange at times?

When I mentioned these ideas to friends back in the UK, they looked at me as if I’d lost my mind. Women take their husband’s name because it’s traditional. Why on earth would a man take his wife’s? And why bother adding a cumbersome second surname when one has always been sufficient? Like paying in pounds and measuring distances in miles, it’s just the way things are done.

But when my wife – who can recite the eight surnames of her grandparents – asks British women why they change their surname, she never receives a satisfactory answer. Not that any justification would convince her anyway. For her, giving up your family name is to betray your family’s history: why would you want to do that?

She read an article on the BBC website in September that shed some light on the mystery. Apparently, there are two main reasons given by women: “It creates an identity as a family, not just as individuals,” and “I hated my surname and this was a chance to change it”. She wasn’t convinced.

The tradition exists all over the English-speaking world and, in a variety of forms, across most of Europe, yet it seems to contradict an increasing awareness of gender equality. In the UK for example, around 60% of women under 30 describe themselves as feminist, but 85% of 18-30 year olds take their husband’s name when they marry. (Continues on page 2)

It seems that our patriarchal past continues to exert a strong influence.

Spain, however, is an interesting exception and its long tradition of two unchanging surnames might have inspired a new trend: double-barrelled surnames.

Once the preserve of the upper-classes, it is becoming increasingly common to carry both surnames, with celebrities such as the actor Sacha Baron Cohen and the singer Beyoncé Knowles-Carter proudly displaying their elongated names (with or without a hyphen).

When having children or tying the knot, a new family name can be created – a joint, shared identity.

So I think I have the solution to my personal dilemma. A new surname to reflect my new identity.       Say hello to Mr Hextall-Fernández de Valderrama-Chamberlain-Ortiz de Pinedo-Martin-Montoya-Parkes-Landázuri! Now that’s important-sounding!

Getting Spanish Citizenship is an Expensive Business

Forget Brexit, what are the British Isles, the UK, Great Britain and Éire?