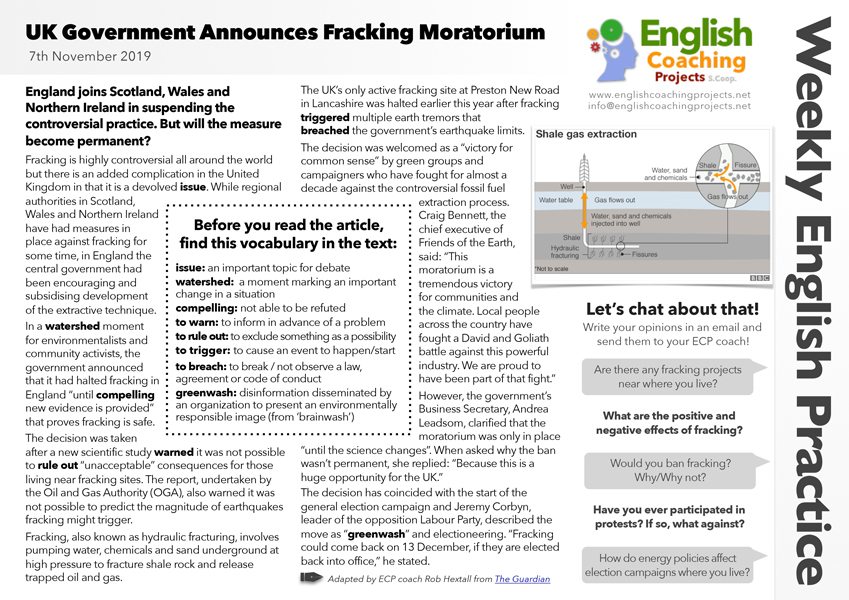 England joins Scotland, Wales and Northern Ireland in suspending fracking. But will the measure become permanent?

England joins Scotland, Wales and Northern Ireland in suspending the controversial practice. But will the measure become permanent?

issue: an important topic for debate

watershed:  a moment marking an important change in a situation

compelling: not able to be refuted

to warn: to inform in advance of a problem

to rule out: to exclude something as a possibility

to trigger: to cause an event to happen/start

to breach: to break / not observe a law, agreement or code of conduct

greenwash: disinformation disseminated by an organization to present an environmentally responsible image (from ‘brainwash’)

Fracking is highly controversial all around the world but there is an added complication in the United Kingdom in that it is a devolved issue. While regional authorities in Scotland, Wales and Northern Ireland have had measures in place against fracking for some time, in England the central government had been encouraging and subsidising development of the extractive technique.

In a watershed moment for environmentalists and community activists, the government announced that it had halted fracking in England “until compelling new evidence is provided” that proves fracking is safe.

The UK’s only active fracking site at Preston New Road in Lancashire was halted earlier this year after fracking triggered multiple earth tremors that breached the government’s earthquake limits.

The decision was welcomed as a “victory for common sense” by green groups and campaigners who have fought for almost a decade against the controversial fossil fuel extraction process. Craig Bennett, the chief executive of Friends of the Earth, said: “This moratorium is a tremendous victory for communities and the climate. Local people across the country have fought a David and Goliath battle against this powerful industry. We are proud to have been part of that fight.”

However, the government’s Business Secretary, Andrea Leadsom, clarified that the moratorium was only in place “until the science changes”. When asked why the ban wasn’t permanent, she replied: “Because this is a huge opportunity for the UK.”

The decision has coincided with the start of the general election campaign and Jeremy Corbyn, leader of the opposition Labour Party, described the move as “greenwash” and electioneering. “Fracking could come back on 13 December, if they are elected back into office,” he stated.

Adapted by ECP coach Rob Hextall from The Guardian

Are there any fracking projects near where you live?

What are the positive and negative effects of fracking?

Would you ban fracking? Why/Why not?

Have you ever participated in protests? If so, what against?

How do energy policies affect election campaigns where you live?