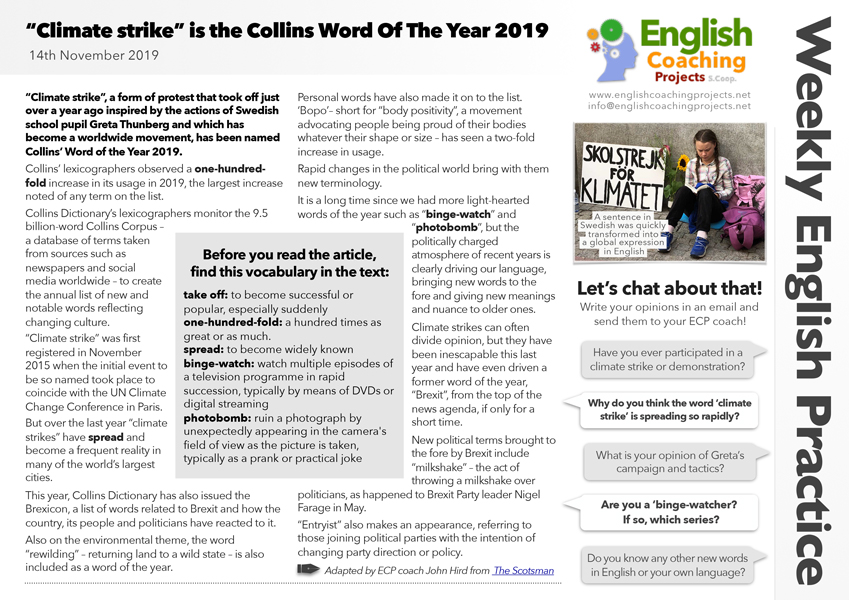 “Climate strike”, a form of protest that took off just over a year ago inspired by the actions of Swedish school pupil Greta Thunberg, has been named Collins’ Word of the Year 2019.

“Climate strike”, a form of protest that took off just over a year ago inspired by the actions of Swedish school pupil Greta Thunberg and which has become a worldwide movement, has been named Collins’ Word of the Year 2019.

take off: to become successful or popular, especially suddenly

one-hundred-fold: a hundred times as great or as much.

binge-watch: watch multiple episodes of a television programme in rapid succession, typically by means of DVDs or digital streaming

photobomb: ruin a photograph by unexpectedly appearing in the camera’s field of view as the picture is taken, typically as a prank or practical joke

Collins’ lexicographers observed a one-hundred-fold increase in its usage in 2019, the largest increase noted of any term on the list.

Collins Dictionary’s lexicographers monitor the 9.5 billion-word Collins Corpus – a database of terms taken from sources such as newspapers and social media worldwide – to create the annual list of new and notable words reflecting changing culture.

“Climate strike” was first registered in November 2015 when the initial event to be so named took place to coincide with the UN Climate Change Conference in Paris.

But over the last year “climate strikes” have spread and become a frequent reality in many of the world’s largest cities.

This year, Collins Dictionary has also issued the Brexicon, a list of words related to Brexit and how the country, its people and politicians have reacted to it.

Also on the environmental theme, the word “rewilding” – returning land to a wild state – is also included as a word of the year.

Personal words have also made it on to the list. ‘Bopo’– short for “body positivity”, a movement advocating people being proud of their bodies whatever their shape or size – has seen a two-fold increase in usage.

Rapid changes in the political world bring with them new terminology.

It is a long time since we had more light-hearted words of the year such as “binge-watch” and “photobomb”, but the politically charged atmosphere of recent years is clearly driving our language, bringing new words to the fore and giving new meanings and nuance to older ones.

Climate strikes can often divide opinion, but they have been inescapable this last year and have even driven a former word of the year, “Brexit”, from the top of the news agenda, if only for a short time.

New political terms brought to the fore by Brexit include “milkshake” – the act of throwing a milkshake over politicians, as happened to Brexit Party leader Nigel Farage in May.

“Entryist” also makes an appearance, referring to those joining political parties with the intention of changing ­party direction or policy.

Adapted by ECP coach John Hird from The Scotsman