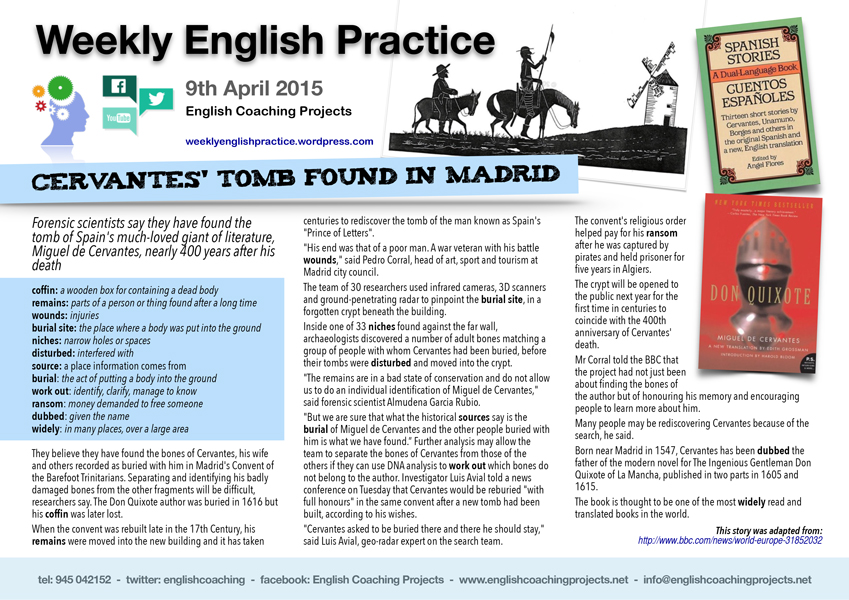 coffin: a wooden box for containing a dead body

remains: parts of a person or thing found after a long time

burial site: the place where a body was put into the ground

source: a place information comes from

burial: the act of putting a body into the ground

ransom: money demanded to free someone

dubbed: given the name

widely: in many places, over a large area

Forensic scientists say they have found the tomb of Spain’s much-loved giant of literature, Miguel de Cervantes, nearly 400 years after his death

They believe they have found the bones of Cervantes, his wife and others recorded as buried with him in Madrid’s Convent of the Barefoot Trinitarians. Separating and identifying his badly damaged bones from the other fragments will be difficult, researchers say. The Don Quixote author was buried in 1616 but his coffin was later lost.

When the convent was rebuilt late in the 17th Century, his remains were moved into the new building and it has taken centuries to rediscover the tomb of the man known as Spain’s “Prince of Letters”.

“His end was that of a poor man. A war veteran with his battle wounds,” said Pedro Corral, head of art, sport and tourism at Madrid city council.

The team of 30 researchers used infrared cameras, 3D scanners and ground-penetrating radar to pinpoint the burial site, in a forgotten crypt beneath the building.

Inside one of 33 niches found against the far wall, archaeologists discovered a number of adult bones matching a group of people with whom Cervantes had been buried, before their tombs were disturbed and moved into the crypt.

“The remains are in a bad state of conservation and do not allow us to do an individual identification of Miguel de Cervantes,” said forensic scientist Almudena Garcia Rubio.

“But we are sure that what the historical sources say is the burial of Miguel de Cervantes and the other people buried with him is what we have found.” Further analysis may allow the team to separate the bones of Cervantes from those of the others if they can use DNA analysis to work out which bones do not belong to the author. Investigator Luis Avial told a news conference on Tuesday that Cervantes would be reburied “with full honours” in the same convent after a new tomb had been built, according to his wishes.

“Cervantes asked to be buried there and there he should stay,” said Luis Avial, geo-radar expert on the search team.

The convent’s religious order helped pay for his ransom after he was captured by pirates and held prisoner for five years in Algiers.

The crypt will be opened to the public next year for the first time in centuries to coincide with the 400th anniversary of Cervantes’ death.

Mr Corral told the BBC that the project had not just been about finding the bones of the author but of honouring his memory and encouraging people to learn more about him.

Many people may be rediscovering Cervantes because of the search, he said.

Born near Madrid in 1547, Cervantes has been dubbed the father of the modern novel for The Ingenious Gentleman Don Quixote of La Mancha, published in two parts in 1605 and 1615.

The book is thought to be one of the most widely read and translated books in the world.