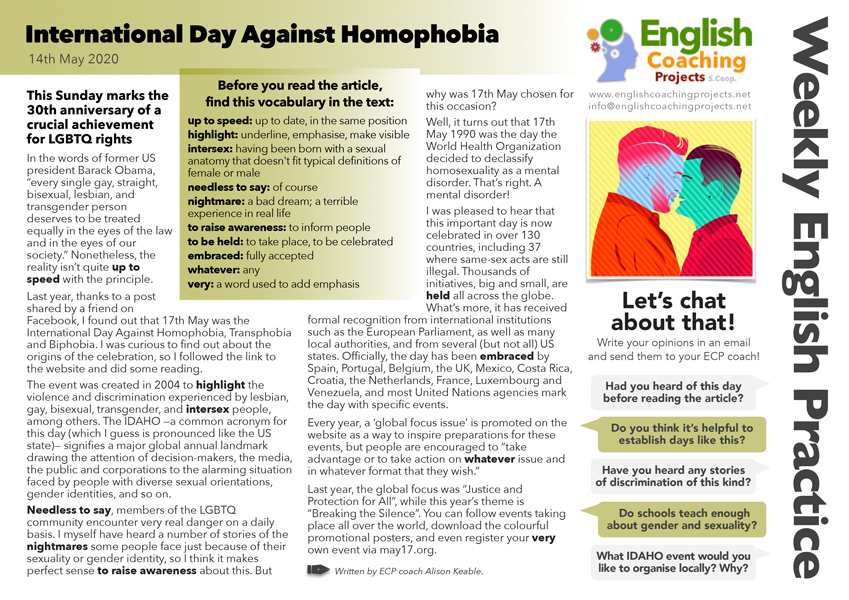 This Sunday is the International Day Against Homophobia – IDAHO – and marks the 30th anniversary of a crucial achievement for LGBTQ rights.

ECP coach Ali looks into IDAHO and what it means to the LGBTQ community.

up to speed: up to date, in the same position

intersex: having been born with a sexual anatomy that doesn’t fit typical definitions of female or male

needless to say: of course

nightmare: a bad dream; a terrible experience in real life

to raise awareness: to inform people

to be held: to take place, to be celebrated

This Sunday marks the 30th anniversary of a crucial achievement for LGBTQ rights.

In the words of former US president Barack Obama, “every single gay, straight, bisexual, lesbian, and transgender person deserves to be treated equally in the eyes of the law and in the eyes of our society.” Nonetheless, the reality isn’t quite up to speed with the principle.

Last year, thanks to a post shared by a friend on Facebook, I found out that 17th May was the International Day Against Homophobia, Transphobia and Biphobia. I was curious to find out about the origins of the celebration, so I followed the link to the website and did some reading.

The event was created in 2004 to highlight the violence and discrimination experienced by lesbian, gay, bisexual, transgender, and intersex people, among others. The IDAHO —a common acronym for this day (which I guess is pronounced like the US state)— signifies a major global annual landmark drawing the attention of decision-makers, the media, the public and corporations to the alarming situation faced by people with diverse sexual orientations, gender identities, and so on.

Needless to say, members of the LGBTQ community encounter very real danger on a daily basis. I myself have heard a number of stories of the nightmares some people face just because of their sexuality or gender identity, so I think it makes perfect sense to raise awareness about this. But why was 17th May chosen for this occasion?

Well, it turns out that 17th May 1990 was the day the World Health Organization decided to declassify homosexuality as a mental disorder. That’s right. A mental disorder!

I was pleased to hear that this important day is now celebrated in over 130 countries, including 37 where same-sex acts are still illegal. Thousands of initiatives, big and small, are held all across the globe. What’s more, it has received formal recognition from international institutions such as the European Parliament, as well as many local authorities, and from several (but not all) US states. Officially, the day has been embraced by Spain, Portugal, Belgium, the UK, Mexico, Costa Rica, Croatia, the Netherlands, France, Luxembourg and Venezuela, and most United Nations agencies mark the day with specific events.

Every year, a ‘global focus issue’ is promoted on the website as a way to inspire preparations for these events, but people are encouraged to “take advantage or to take action on whatever issue and in whatever format that they wish.”

Last year, the global focus was “Justice and Protection for All”, while this year’s theme is “Breaking the Silence”. You can follow events taking place all over the world, download the colourful promotional posters, and even register your very own event via may17.org.