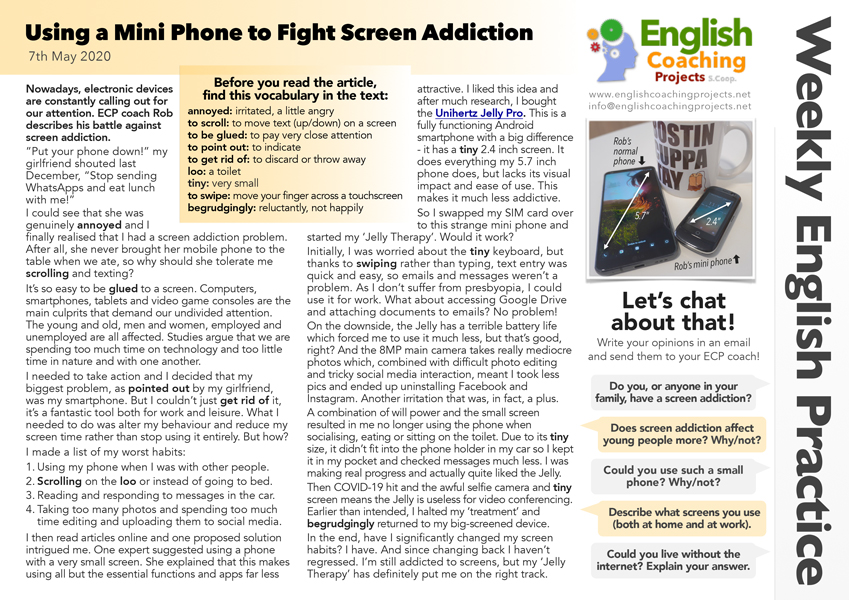 Nowadays, electronic devices are constantly calling out for our attention. ECP coach Rob describes his battle against screen addiction.

to scroll: to move text (up/down) on a screen

to be glued: to pay very close attention

to point out: to indicate

to get rid of: to discard or throw away

to swipe: move your finger across a touchscreen

Nowadays, electronic devices are constantly calling out for our attention. ECP coach Rob describes his battle against screen addiction.

”Put your phone down!” my girlfriend shouted last December, “Stop sending WhatsApps and eat lunch with me!”

I could see that she was genuinely annoyed and I finally realised that I had a screen addiction problem. After all, she never brought her mobile phone to the table when we ate, so why should she tolerate me scrolling and texting?

It’s so easy to be glued to a screen. Computers, smartphones, tablets and video game consoles are the main culprits that demand our undivided attention. The young and old, men and women, employed and unemployed are all affected. Studies argue that we are spending too much time on technology and too little time in nature and with one another.

I needed to take action and I decided that my biggest problem, as pointed out by my girlfriend, was my smartphone. But I couldn’t just get rid of it, it’s a fantastic tool both for work and leisure. What I needed to do was alter my behaviour and reduce my screen time rather than stop using it entirely. But how?

I then read articles online and one proposed solution intrigued me. One expert suggested using a phone with a very small screen. She explained that this makes using all but the essential functions and apps far less attractive. I liked this idea and after much research, I bought the Unihertz Jelly Pro. This is a fully functioning Android smartphone with a big difference – it has a tiny 2.4 inch screen. It does everything my 5.7 inch phone does, but lacks its visual impact and ease of use. This makes it much less addictive.

So I swapped my SIM card over to this strange mini phone and started my ‘Jelly Therapy’. Would it work?

Initially, I was worried about the tiny keyboard, but thanks to swiping rather than typing, text entry was quick and easy, so emails and messages weren’t a problem. As I don’t suffer from presbyopia, I could use it for work. What about accessing Google Drive and attaching documents to emails? No problem!

On the downside, the Jelly has a terrible battery life which forced me to use it much less, but that’s good, right? And the 8MP main camera takes really mediocre photos which, combined with difficult photo editing and tricky social media interaction, meant I took less pics and ended up uninstalling Facebook and Instagram. Another irritation that was, in fact, a plus.

A combination of will power and the small screen resulted in me no longer using the phone when socialising, eating or sitting on the toilet. Due to its tiny size, it didn’t fit into the phone holder in my car so I kept it in my pocket and checked messages much less. I was making real progress and actually quite liked the Jelly.

Then COVID-19 hit and the awful selfie camera and tiny screen means the Jelly is useless for video conferencing. Earlier than intended, I halted my ‘treatment’ and begrudgingly returned to my big-screened device.

In the end, have I significantly changed my screen habits? I have. And since changing back I haven’t regressed. I’m still addicted to screens, but my ‘Jelly Therapy’ has definitely put me on the right track.