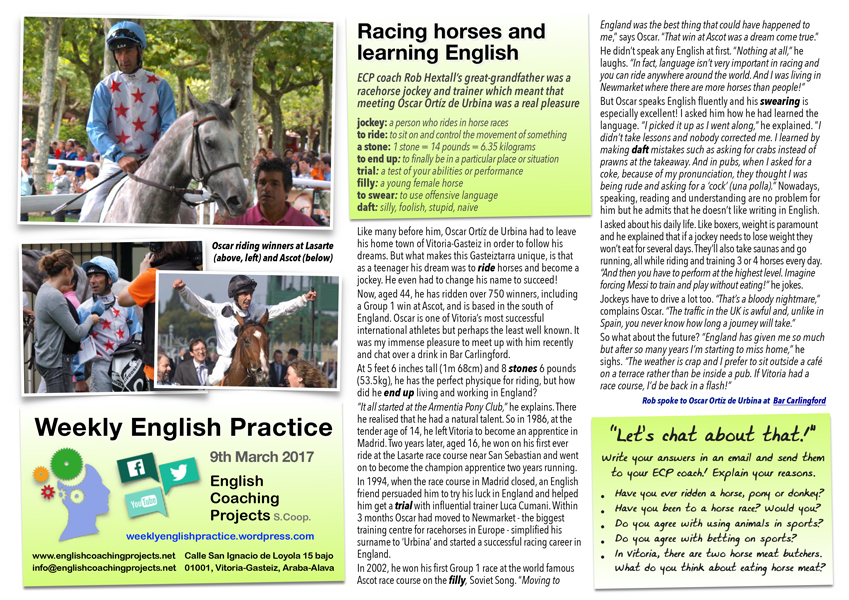 jockey: a person who rides in horse races

to ride: to sit on and control the movement of something

to end up: to finally be in a particular place or situation

trial: a test of your abilities or performance

to swear: to use offensive language

Like many before him, Oscar Ortíz de Urbina had to leave his home town of Vitoria-Gasteiz in order to follow his dreams. But what makes this Gasteiztarra unique, is that as a teenager his dream was to ride horses and become a jockey. He even had to change his name to succeed!

Now, aged 44, he has ridden over 750 winners, including a Group 1 win at Ascot, and is based in the south of England. Oscar is one of Vitoria’s most successful international athletes but perhaps the least well known. It was my immense pleasure to meet up with him recently and chat over a drink in Bar Carlingford.

“It all started at the Armentia Pony Club,” he explains. There he realised that he had a natural talent. So in 1986, at the tender age of 14, he left Vitoria to become an apprentice in Madrid. Two years later, aged 16, he won on his first ever ride at the Lasarte race course near San Sebastian and went on to become the champion apprentice two years running.

In 1994, when the race course in Madrid closed, an English friend persuaded him to try his luck in England and helped him get a trial with influential trainer Luca Cumani. Within 3 months Oscar had moved to Newmarket – the biggest training centre for racehorses in Europe – simplified his surname to ‘Urbina’ and started a successful racing career in England.

In 2002, he won his first Group 1 race at the world famous Ascot race course on the filly, Soviet Song. “Moving to England was the best thing that could have happened to me,” says Oscar. “That win at Ascot was a dream come true.”

He didn’t speak any English at first. “Nothing at all,” he laughs. “In fact, language isn’t very important in racing and you can ride anywhere around the world. And I was living in Newmarket where there are more horses than people!”

But Oscar speaks English fluently and his swearing is especially excellent! I asked him how he had learned the language. “I picked it up as I went along,” he explained. ”I didn’t take lessons and nobody corrected me. I learned by making daft mistakes such as asking for crabs instead of prawns at the takeaway. And in pubs, when I asked for a coke, because of my pronunciation, they thought I was being rude and asking for a ‘cock’ (una polla).” Nowadays, speaking, reading and understanding are no problem for him but he admits that he doesn’t like writing in English.

I asked about his daily life. Like boxers, weight is paramount and he explained that if a jockey needs to lose weight they won’t eat for several days. They’ll also take saunas and go running, all while riding and training 3 or 4 horses every day. “And then you have to perform at the highest level. Imagine forcing Messi to train and play without eating!” he jokes.

Jockeys have to drive a lot too. “That’s a bloody nightmare,” complains Oscar. “The traffic in the UK is awful and, unlike in Spain, you never know how long a journey will take.”

So what about the future? “England has given me so much but after so many years I’m starting to miss home,” he sighs. “The weather is crap and I prefer to sit outside a café on a terrace rather than be inside a pub. If Vitoria had a race course, I’d be back in a flash!”